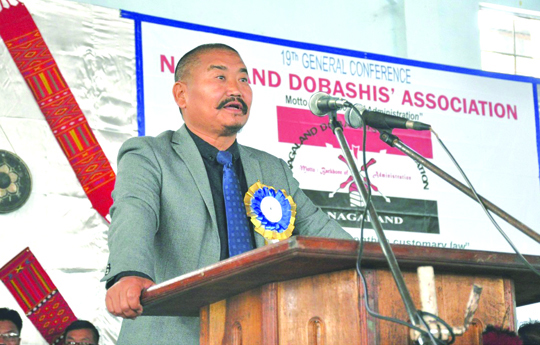 The minister said the Forest (Conservation) Act, 1980, is applicable not only to “forest land” as in section-2 of the Act but also includes “forest” as understood in the dictionary as per a Supreme Court judgment dated December 12, 1996

“Subsequently, it has further been clarified that any area recorded in government documentation, regardless of ownership would invite applicability of the Forest (Conservation Act), 1980,” the minister said.

Yollow was replying to a starred question posed by MLA Kuzholuzo Nienu on the first day of the 12th session of the 13th Nagaland Legislative Assembly.

The minister stated that the government of Nagaland, in a notification dated July 3, 1986, has extended the Forest (Conservation) Act 1986 in respect of government reserve forests and such other forests and wildlife sanctuaries under the control of the state government.

On being further asked whether government-occupied land comes under the Forest Conservation Act, the minister affirmed that forests under the control of the state government come under the said Act.

Further replying to queries, the minister stated that in Nagaland the land holding system rests more on individuals and communities than by the state government.

While many could claim their own lands in the name of Article 371 A, Yollow said that the authority cannot do away with the system of land ownership and acquire lands in Nagaland although there are few lands purchased by the government.

Meghalaya Governor to preside over 7th convocation of USTM