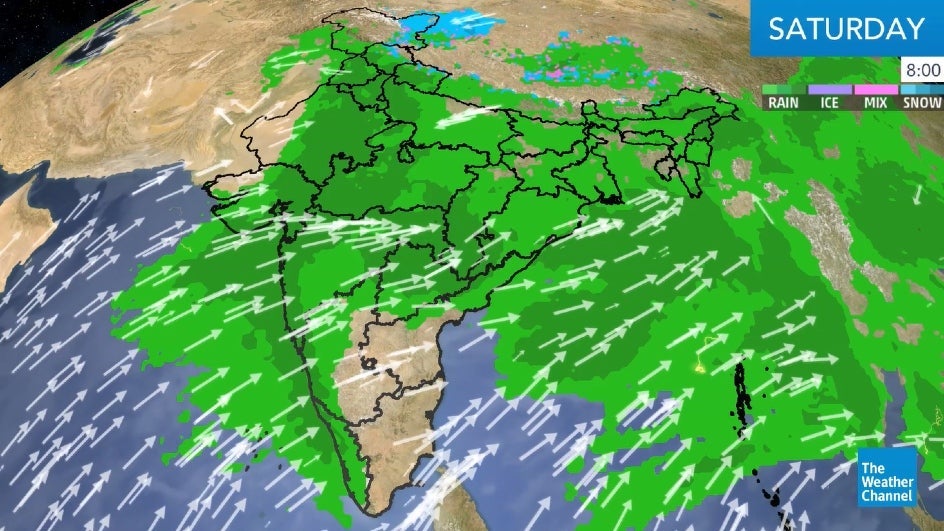 Here’s the latest weather outlook for India for the next two days:

Forecast summary for the next five days:

A wet spell will prevail over Northwest & East India from May 20 to 24, with the regions witnessing a enhancement in thunderstorm activity between May 22 and 24.

Scattered to fairly widespread light to moderate rainfall with isolated thunderstorms or gusty winds likely over Bihar, Jharkhand, Gangetic West Bengal and Odisha during the next 4-5 days.

Widespread light / moderate rainfall with isolated heavy falls is forecast over Arunachal Pradesh on May 21, over Assam-Meghalaya and Sub-Himalayan West Bengal and Sikkim until May 22. Isolated extremely heavy falls are very likely over Meghalaya on May 21. Significant reduction in rainfall intensity over Northeast India from May 22.

Meanwhile, a depression has formed over the Gulf of Martaban and adjoining Myanmar. Under its influence, the Andaman and Nicobar Islands will witness heavy rains, thundersqualls or gusty winds for the next five days. Fishermen are advised against venturing into the Gulf of Martaban, adjoining the North Andaman Sea Andaman, along and off the South Myanmar coast for the next 24 hours.

High-temperature areas at or above 40 ° C will gradually shrink. Both daytime and nighttime temperatures will be extreme or relatively higher than average over much of the Trans Himalayas and Western Himalayan Region at least until the beginning of June.

For weather, science, space, and COVID-19 updates on the go, download The Weather Channel App (on Android and iOS store). It’s free!

Is cheese good for the teeth? A dentist answers

Will Indian Payment Systems Be Able To Deal With Russia-like Sanctions?...