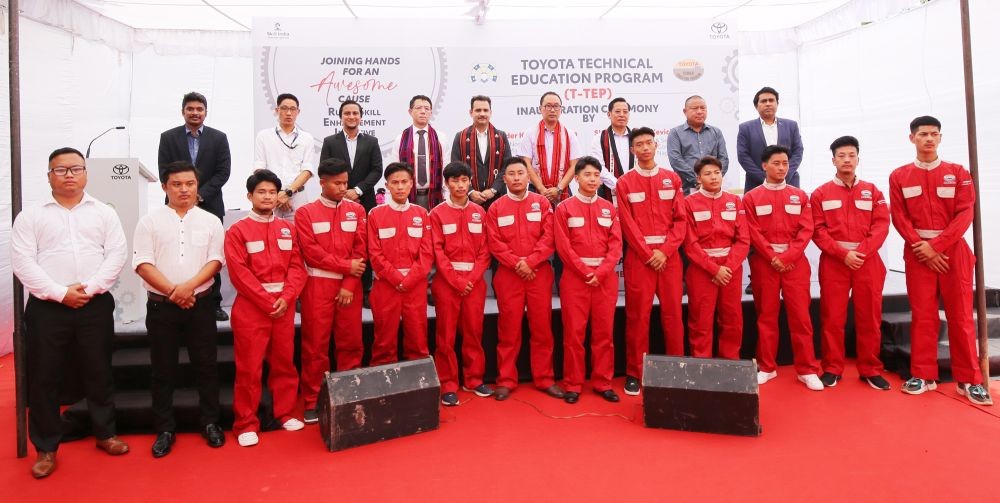 Trainees along with guests at the launch of the skill enhancement and employability imitative under Toyota Technical Education Program at NTTC, Dimapur on September 23. (Morung Photo)

With a view towards equipping and up-skilling the youths of Nagaland along industry requirements, a skill enhancement and employability initiative under Toyota Technical Education Program (T-Tep) in collaboration with Nagaland Tool-Room & Training Center (NTTC) was launched in Dimapur on September 23.

Kekhrievor Kevichusa, IPoS, Commissioner and Secretary, Industries and Commerce, Government of Nagaland who was the special guest for the event appreciated the enterprising steps taken by NTTC to grow in several directions even without the help of the government. “The NTTC is one of the prides of the Industry department,” I noted.

He added that the initiative with Toyota motors is one of the most progressive and inventive ideas undertaken by the institute. As this would provide much needed skills for the youth of the state. “This training program is not only meant for you to be employed in a Toyota showroom or servicing center but it will also enhance your skills and employability, chances of getting funding for your own entrepreneurial ideas,” he noted.

I further encouraged the creation of more training programs, not just in automotive but with other industrial firms in the near future. “Maybe someday we will see an IBM-partnered training program here which we will work towards,” the official mentioned.

Varinder Kumar Wadha, General Manager Associate, East & North East Head, Toyota Kirloskar Motor Pvt Ltd, who was also invited for the event noted this was the 56th institute to be tied for the T-Tep initiative. These training programs were first conceptualized in the year 2006 and since then, they have been launched across India in over 22 states.

“Over the years, 10,000 students have been trained in these T-Tep institutes and out of these around 70% are already working in various automobile companies, dealer automations,” Wadha highlighted.

As part of this measure, Toyota and its dealership partners have invested as much as Rs 15 lakhs towards creating the infrastructure and resources needed in each institute including at NTTC. On top of which I stated apart from technical skills, Toyota teaches the students values ​​and practices applied by the company throughout the training program.

Moreover, I revealed that Toyota is set to expand its operations in Kohima not only in sales but also in services.

Vikeho Swu, MLA and Manager Director of Okusa Toyota, recognized through this initiative, students from Nagaland will get training on advanced technologies along with ‘on the job’ training provided by Okusa Toyota, besides becoming employable in the automobile industry which will be beneficial not just for the students themselves but also for the entire community.

During the launch of the program, a total of 11 students who had finished their training courses were handed over certificates of completion with Toyota Motors. In addition, two of the trainees were given job offers to work at their industrial plant.

According to the officials, T-Tep is a special training module designed to provide the technical know-how training to students across India along with hands on job training within Toyota dealerships.

A mouse with Covid triggers an alert in the Taiwan lab...