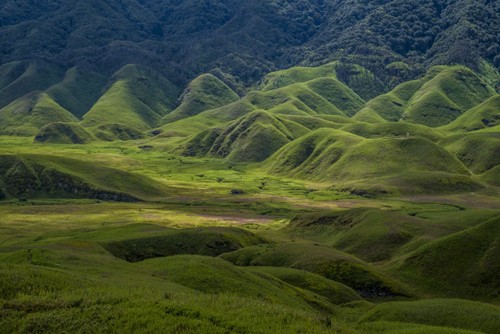 Nagaland has scenic places both for the adventurous and non-adventurous

Eastern Mirror Desk
Dimapur, Aug. 3 (EMN): Nature and culture lovers may find everything in Nagaland fascinating as it is blessed with both in abundance. A hill station with good green cover, the state is rich in biodiversity with many flora and fauna, and the people take pride in its rich cultural heritage.

With an area of ​​16,579 sq.km and population of 1,980,602 (as per 2011 Census of India), the state is home to 17 major tribes and sub-tribes with distinct customs, language and attires. Although the Hornbill Festival, an annual event celebrated from December 1 to the 10thhas become the biggest crowd puller and a tourist attraction over the years, each of the communities in the state have their own traditional festivals, thus the moniker “Land of festivals”.

While it is difficult to list tourist destinations, as the topography is similar across the state, some places have become hotspots for both local visitors and those from outside the state. But for the adventurous, it won’t be anything like spending time with the villagers and getting close to relatively undisturbed nature in the rural areas. Nagaland offers both – for the adventurous and non-adventurous.

Here are top 10 tourist places / destinations (in no particular order) to visit in Nagaland:

2. Kohima: Being the capital of the state, Kohima houses the Vidhan Sabha (Legislative Assembly), Secretariat and several other major government facilities. It has a beautiful landscape with a mix of modern and village look. Besides popular spots like World War II Cemetery and The Cathedral of Kohima, there are several tourist hotspots like Kisama Heritage Village, Khonoma Green Village, Japfu Peak, Tuophema Tourist Village etc. in the district.

3. Dzukou Valley: This picturesque valley is located at an altitude of 2,438.4 meters and about 30 km south of Kohima. A trekker’s delight, the valley is home to endemic lilies and several other flora and fauna. It attracts most visitors during the flowering season, from the month of June to September.

4. Doyang: Located in Wokha district, Doyang is a major tourist attraction with a beautiful landscape. It is home to the state’s well-known hydro electricity project and the Amur falcon adorns its skies between October and November every year in thousands. It’s an ideal place for people who love camping, boating and angling.

5. Khezhakeno village: It is a historical village in Phek district known for being the first settlement site of the foremost Naga ancestral forefather ‘Koza’. A flat stone called Tso Tawo (spirit stone), believed by the forefathers to generate double-fold if a basket of paddy is parched in the sun on the stone slab, also located in the village.

6. Mt. Saramati: With a height of 3,826 m, Mt. Saramati, located near Thanamir village in Kiphire district, is the highest peak in Nagaland. It is a prominent peak in Southeast Asia with a variety of flora and fauna.

7. International Trade Center (ITC): The Meluri sub-division in Phek district is home to Shilloi lake (Lütsam village), which is associated with many legends. The sub-division also has international trade centers at Phokhungri and Avankhung, where many Nagas in Myanmar can be seen shopping.

8. Mokokchung: Home of the Ao Naga, the district has popular tourist spots like Mopungchuket, which was declared ‘rural tourism village’ by the government of Nagaland in 2007, for its historical, mythological and cultural assets; and Longkhum village, believed to be the resting place of a dead person’s spirit before their onward journey to paradise.

Mon: The district has several villages that have Second World War remains and rock inscriptions. Shangnyu is a prominent village where the Angh’s house believed to be more than 500 years old is located. Longwa is another interesting village, where the Angh’s house is located lies half in India half in Myanmar but the administration falls under the village chief. Besides beautiful landscape, visitors can check Shangphan Wildlife Sanctuary, Veda Peak and Chalsoise village where human skulls belonging to the head-hunting days are displayed in a place called Waloo.

Noklak: Formally inaugurated as a new district in January 2021, Noklak is blessed with mesmerizing landscape and rich cultural heritage. The Indo-Myanmar border pillar 146 is located in the International Trade Center (ITC) Dan, the last village of the district. Other places of interest include Pangsha, a historic village that houses the Village Guards Museum; Chipur village, which is known for its complex cave system and daunting cliff that adventurers can explore; and scenic landscape of Choklangan village which is located between the mountain of khulia king, kenking, and enshao king.

How to Check Whether a Used iPhone Has Been Repaired