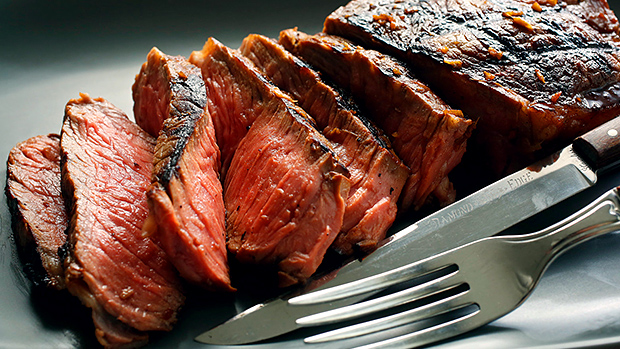 Here’s where it might look like I’m contradicting myself a little bit. You know how I said the cholesterol in food doesn’t matter? Well, it does if you eat a lot of cholesterol in combination with a lot of saturated fat.

Say you like to pound down steak. Most red meat normally contains a lot of saturated fat and a significant amount of cholesterol, so when you eat it regularly, you usually see an increase in LDL cholesterol.

The good news is that the saturated-fat-laden steak also raises HDL cholesterol, so your total cholesterol to HDL ratio (a supposed marker for cardiovascular disease) isn’t altered.

So, in general, high-ish cholesterol foods that don’t contain a lot of saturated fat like eggs and shrimp won’t affect LDL cholesterol levels, but high-cholesterol, high-saturated fat foods like steaks and other cuts of red meat will.

However, as stated, the red meats shouldn’t affect your long-term cardiovascular health because it doesn’t appear to affect the LDL / HDL ratio. So the question is, should you eat steak and burgers and such with impunity?

The research is sometimes confusing. A study from 1991, funded by the U.S. Surgeon’s Office, found that if Americans cut the amount of saturated fat they ingested, they could delay 42,000 deaths each year by, drum roll please, an average of two weeks.

But even so, any lengthening of lives probably had little to do with cholesterol itself.

Fit and Drunk: Do Fit People Drink Too Much Alcohol?