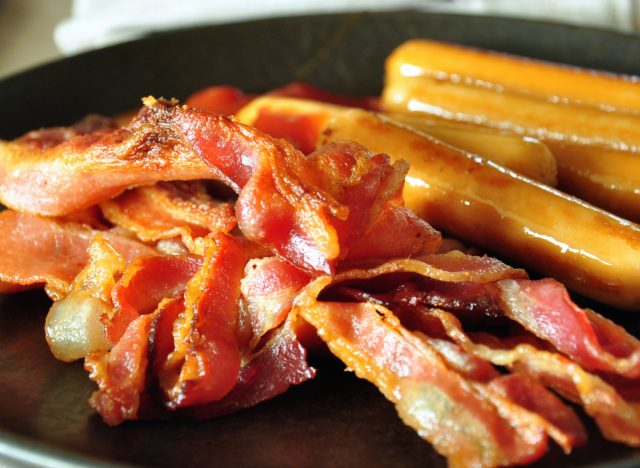 Protein is a macronutrient that provides the body with amino acids that are used for many biological roles in the body. You can get protein from both plant and animal foods, but you do have to be more wary of your choices when it comes to animal sources.

With animal protein, you do want to choose lean cuts where you are getting numerous essential nutrients your body needs but with lower saturated and total fat amounts. Processed meats and higher fat cuts are very high in saturated fat, a nutrient that has been linked to an increased risk of heart disease. For that reason, processed meat isn’t the healthiest choice for your heart.

How do processed meats affect your heart?

Processed meats are any meats that undergo salting, curing, or smoking, the most common examples being sausage and bacon. By processing the meats in this manner, the resulting protein tends to be higher in sodium in addition to the higher amounts of saturated fats that the meat may already contain.6254a4d1642c605c54bf1cab17d50f1e

As touched on earlier, eating too much saturated fat is associated with an increased risk of heart disease. The PURE (Prospective Urban Rural Epidemiology) study published in the American Journal of Clinical Nutrition followed 134,297 individuals for close to 10 years. The study found that a higher intake of processed meat of at least 150 grams per week compared to zero grams per week was associated with a higher risk of cardiovascular disease. It should be noted that a significant association between unprocessed red meat and poultry and major cardiovascular disease was not found.

How much should I consume?

According to the 2020-2025 Dietary Guidelines for Americans, it’s recommended to have no more than 10% of your total calories from saturated fat and a maximum of 2,300 milligrams of sodium. Data from the dietary guidelines show that close to all Americans consume over the current sodium recommendations.

To put it in perspective, three slices of cooked bacon have about 95 calories, 7.75 grams of protein, 6.54 grams of fat, 2.38 grams of saturated fat, and 345 milligrams of sodium. That’s close to 12 percent of your daily recommended amount of saturated fat based on a 2,000-calorie diet — and remember bacon is usually consumed with other foods that are high in saturated fat and sodium.

RELATED: The # 1 Best Protein to Eat for Your Heart, Says Dietitian

If you choose to eat processed meat like bacon, choose to eat it on occasion and smaller portions. There is also uncured bacon available. Uncured bacon doesn’t use sodium nitrites to cure. It tends to be cured with a form of celery, which has natural nitrites plus sea salt and other flavorings. The same goes for other processed meats and poultry — you can often find better-for-you versions with less salt or made with a leaner cut of meat.

Record number of journalists behind bars or murders: report

INR 2258.89 lakh released to Nagaland under scheme to promote organic...