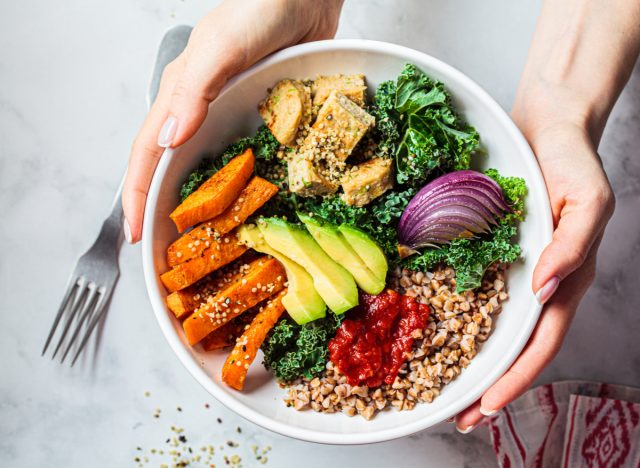 When it comes to the best eating habit to lower your risk of cancer, opting for a diet that doesn’t rely on meat might be the way you want to go. However, it turns out that there’s a specific kind of plant-based diet that is ideal for helping you avoid breast cancer.

During NUTRITION 2022, the American Society for Nutrition’s recent annual meeting, research that was presented broke down results from a study that involved information from 65,574 participants which was collected between 1993 to 2014, per Medscape. The data showed that those who ate less meat were 14% less likely to develop breast cancer. However, that only applied to participants who stuck to a healthy diet that was primarily plant-based. Others who were eating plant-based diets yet also consumed unhealthy foods and drinks saw an increased breast cancer risk of 20%.

At the same time, Shah added that “an unhealthy plant-based diet comprising higher intakes of primarily processed products of plant origin, such as refined grains, fruit juices, sweets, desserts, and potatoes, would be worse for breast cancer prevention.”

“These findings add to a body of evidence that shows that highly-refined foods, such as potato chips, French fries, and juice, while vegetarian, lack many of the nutrients that contribute to a lower cancer risk, including fiber, vitamins, minerals , and phytonutrients, ” Elizabeth Ward, MS, RDNand co-author of The Menopause Diet Plan, A Natural Guide to Hormones, Health and Happiness tells Eat This, Not That !.

Ward also notes that a “well-planned, balanced plant-based diet reduces the risk of cancer by providing significant amounts of antioxidant vitamins and minerals, fiber, and phytonutrients, protective compounds found only in fruits, vegetables, nuts, seeds, legumes, soy foods and grains and other plants. ” In turn, “the antioxidants in plant foods help protect cells from mutating into tumors.”

While Ward explains that food and drink options like chips and juice “aren’t necessarily ‘bad,'” she explains that they “aren’t on the top of my list as cancer-fighters because they are so highly refined.”

“For example, a baked potato provides fiber and other nutrients as well as phytonutrients and is low in fat, while potato chips have very few, if any, protective nutrients and are relatively high in fat,” Wards says. On top of that, “eating lots of highly refined plant foods can crowd out other, more nutritious choices that provide cancer-fighting nutrients.” Finally, Ward says “the other issue is calories,” as “too many foods that are relatively high in calories can lead to becoming overweight which is associated with certain forms of breast cancer.”

To find out more about how your diet can help you avoid disease, be sure to read 50 Worst Foods to Never Eat if Cancer Runs in Your Family.

Desirée O is a freelance writer who covers lifestyle, food, and nutrition news among other topics. Read more

ASX down 0.4%, Aussie tech stocks wiped by US aftermarket rout...