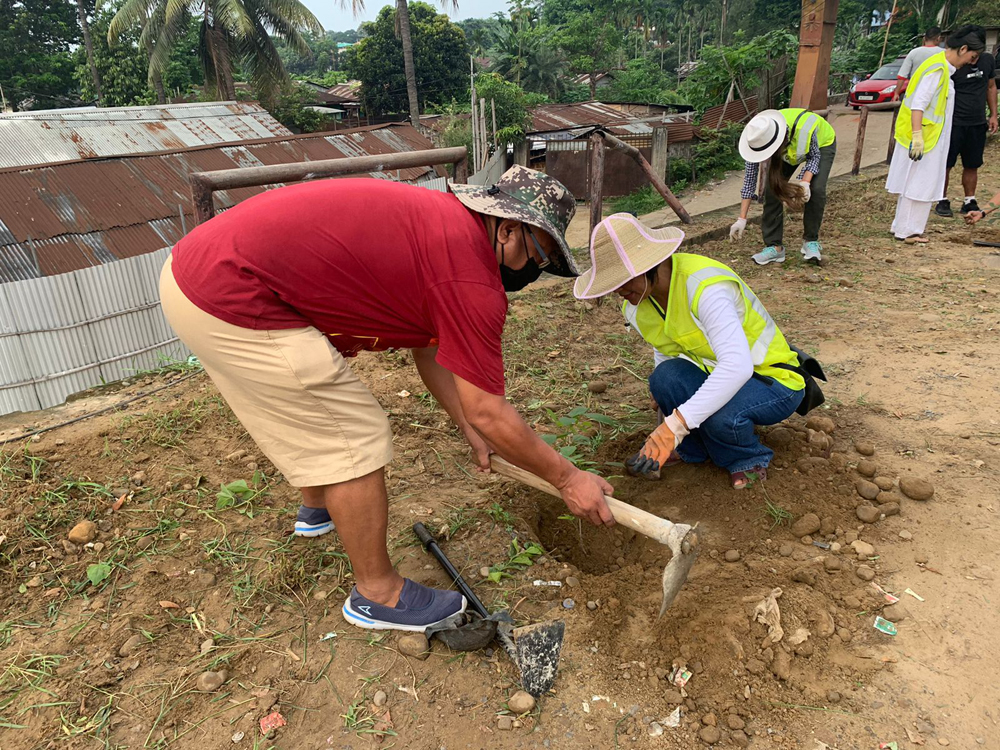 Our Reporter
Dimapur, July 30 (EMN): Team Better Dimapur (TBD) carried out another plantation and beautification drive along the stretch between New Dhansiri Bridge, near Urban Haat, and Super Market on July 30. The event was organized in collaboration with the director of Census Department and Dimapur Municipal Council (DMC ).

It was reported that 47 tabebuia saplings were planted on both sides of the road and covered with green sheets. A total of 50 ornamental trees were also donated by the Census department.

In the future, the team also plans to construct a waiting and resting area with drinking water and washroom facilities along the stretch.

In the second phase of the drive, the team would carry out a bougainvillea plantation drive followed by bridge beautification in the third phase.

The plantation drive was joined by the students of Golden Crown Theological College and individuals.

The music director of Golden Crown Theological College (GCTC), Avoni Odyuo, who participated with the Better Dimapur team for the first time, assured their participation with the team with more manpower next time.

Odyuo, who has lived outside the country for most of the time before coming to Nagaland, shared that her team found their participation fulfilling because they were contributing something positive to the city.

“Whether we like it or not, Dimapur is our city and it is our duty as citizens and Christians to care for the place we live in. Especially in a day and age where the climate crisis is going on, I think every citizen should step up and contribute to fight for our city and world” she opined.

“I think we can plant more indigenous trees and plants to help reduce carbon dioxide in the air, thus purifying the air for us. Additionally, planting more trees and plants also reduces the temperature and cools down the city. Much needed in a concrete jungle like Dimapur. We can adopt Singapore’s model of “a city in a garden” (not a garden in a city but a city in a garden – denoting that garden is larger than the city) – this will make summer more bearable for us Dimapurians,” she added .

“On today’s drive it got me so mad to learn that our people still throw trash anywhere. Let us start using a dustbin for our trash. Waste management department needs to step up and do their job and also the citizens need to stop littering. This is basic civic sense for a civilized society. Maybe DMC can start imposing fines for littering. But I wish our people learn not to litter without fines or rules,” she lamented.

She further stated that since 2020, GCTC has started a green campus project to plant more plants and flowers on campus. She expressed hope that more schools and colleges would have their own ‘green campus.’

"IF NLTP LIFTED, REVENUE SHOULD BE USED FOR EDUCATION AND HEALTH"