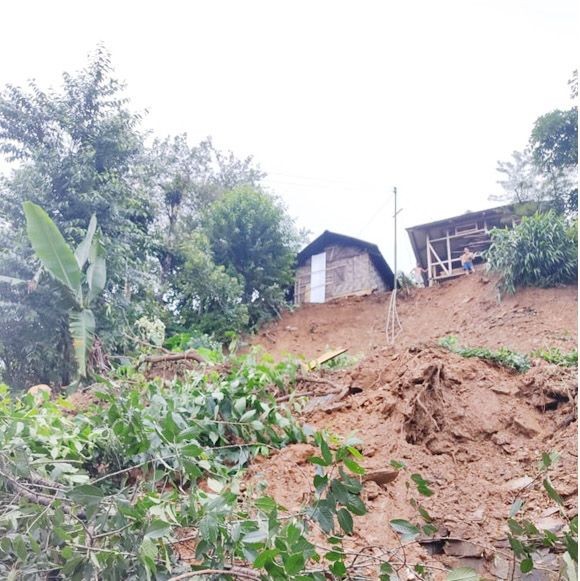 Damage caused by incessant rainfall in Noklak. Several other districts in Nagaland also reported damage to infrastructure and properties.

DIMAPUR, JUNE 23 (MExN): Due to incessant rains over the course of the past few days, damage to property and infrastructure were reported from several parts of the State.

A press release from the NSDMA informed that damages were reported from Tening sub division and Athibung Sub-Division. Road blockages along Kohima – Leikie road and NEC road were reported due to landslide / mudslide.

Machineries available in the Sub-division were pressed into action for immediate road clearance to facilitate movement of people and essential goods.

However, major relief intervention remains to be deployed in respect of destruction to public infrastructure and public property, damage to private residences and hanging bridges which serves as a lifeline to many villages, the press release said. Unless there is immediate intervention, further damages are likely to worsen the existing situation especially in respect of community assets, it added.

Meanwhile, the NSDMA informed that reports have also been received from Noklak district that major landslides have been reported at Panyangan Sector, High School Sector, Danlepdong Sector, Nokyan B Village, Nokyan Village, Dem Sector and Kaongao Sector. Evacuation of affected families is being carried out presently by the District Disaster Management Authority.

The authority further said that on the night of June 21, heavy rainfall caused landslides at Nokhu approach road blocking the road to more than 20 villages. With the rain continuing, the District Disaster Management Authority (DDMA) Noklak is carrying out road clearance operations in the affected areas.

The DDMA Phek also reported major landslides between Khomi and Pholami road, Chizami and Mesulimi, Meluri, Lozaphuho and Lanye Village. Machineries have been pressed into action for immediate clearance of the road blockages. The DDMA advised all commuters to travel with caution on these routes as more major landslides are expected with the continuous downpour.

The DDMA Wokha, meanwhile has also advised all commuters traveling towards Chukitong to Doyang Bridge to avoid taking the said route as landslides in the area have been reported.

The Wokha Deputy Commissioner has meanwhile issued a notice informing all travelers to take the O Point-Doyang-Sungro-Alichen road due to landslides at 78 + 080 km (NH-2).

Tucking into that ‘light’ version of your favorite meal may be...