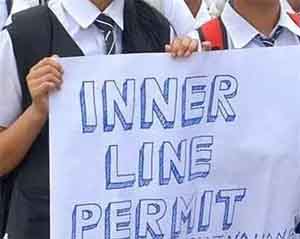 Dimapur, Sep. 21 (EMN): The newly created Niuland district will come under the purview of inner line permit (ILP) with effect from October 1, 2022.

According to a DIPR report, this in exercise of the powers conferred by Section (4) of the Bengal Eastern Frontier Regulation, 1873, and in continuation to Home Department (Political Branch), notification dated Kohima, December 9, 2019.

“Every non-Indigenous person henceforth entering the area of ​​District of Niuland shall be required to obtain an ILP in the same mode and manner as presently required for entering the ILP area of ​​Nagaland state and under the same condition as provided in Notification of even number dated 3/5/2018,” it stated.

Every non-indigenous person who is settled or has entered the area of ​​District of Niuland which was hitherto not covered under ILP, before the date of issue of the notification and on or after 21/11/1979, the day the aforesaid area of ​​Niuland was constituted as Tribal belt vide Land Revenue Department Notification No.LR/2-118/76 dated 21/11/1979, shall be required to obtain ILP in the same mode and manner and under the same condition as mentioned in Para 1 above within ninety (90 days) from the date of issue of the notification, it stated.

Every non-indigenous who has settled or has entered the area of ​​District of Niuland which was hitherto not covered under ILP prior to 21/11/1979, and has been continuously, will be exempted along with his/her direct descendants, from the requirements of having an ILP subject to him/her producing evidence of the same.

Furthermore, any non-indigenous person passing through the District of Niuland to another state as transit passenger and having a valid ticket will not be required to obtain ILP, it stated.

U19 WC: India captain, vice-captain in isolation due to Covid