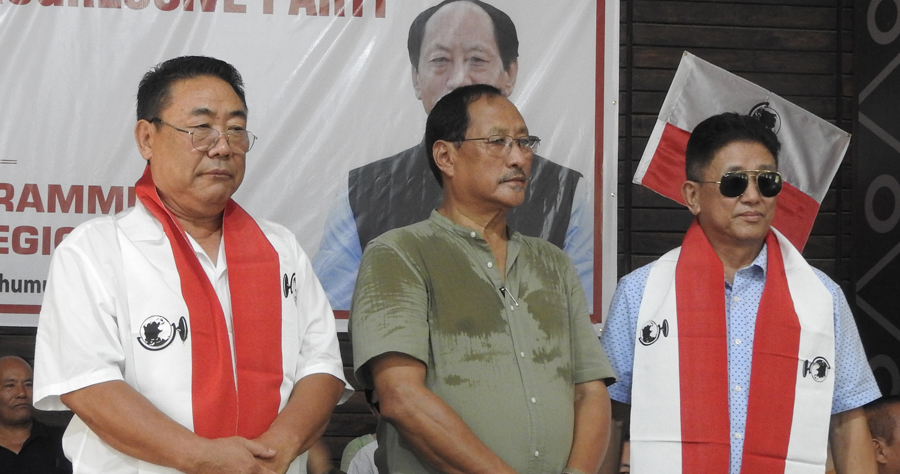 Our Reporter
Dimapur, June 8 (EMN): Member of the Legislative Assembly (MLA) Moatoshi Longkumer, one of the 21 Naga People’s Front (NPF) legislators who joined the Nationalist Democratic Progressive Party (NDPP) in April this year, said that the move was not to create problems but to work together for the greater glory of the party. He, therefore, asked the pioneers of NDPP to remove any apprehensions with regard to them joining the party.

He was speaking during a congratulatory program for the new members organized by NDPP Dimapur region at Chumoukedima Town Council Hall on Wednesday.

Longkumer thanked the organizers for inducting them and expressed that joining the party with the supporters and colleagues would further strengthen the NDPP.

While assuring to work together with sincerity, commitment and mutual respect, he asked his supporters as well as party pioneers to work together to remove all obstacles that they may face in the future.

MLA Azheto Zhimomi, who also spoke at the program, said that there were many criticisms as well as appreciations when the 21 NPF “merged” with NDPP. He added that they decided to join and work with Chief Minister Neiphiu Rio as he was keen to resolve the political issue.

‘Nagas should come together at this point of time,’ he said.

“We are not here to divide the parties but we are here to strengthen the party, so let us be united and face the upcoming election and stay loyal to the party,” he said, adding that he was also a founding member of the NDPP. .

Advisor for Sericulture, Excise and Minority Affairs, Zhaleo Rio, also welcomed the two MLAs from Dimapur – Longkumer and Zhimomi – and the party workers. He said that “with the two MLAs joining the party, I feel very encouraged and today is a proud moment for us”.

He asked everyone to continue to live in unity and help the people as well as support the government.

He said that Nagaland is a small state and therefore, ‘there cannot be two strong regional parties, and it is also not in the interest of the Nagas’. He said the merger of 21 NPF MLAs is for a good cause, which is to facilitate Naga political issue.

He further appealed to stop “ism” but made a commitment to remain loyal to the party.

Charlie Sekhose, senior vice president (central) Convenor, re-organizing committee, shared that “Naga peace talk is at a very crucial stage, for which coming together and inclining toward a common goal at this juncture is imperative irrespective of our social and political differences ”.

“Together, let us try to work cohesively to achieve the party’s program and policies while rendering our unflinching support to our leaders to take the party to greater heights,” he stated.

Who Should Open Batting For India In South Africa? Aakash Chopra...