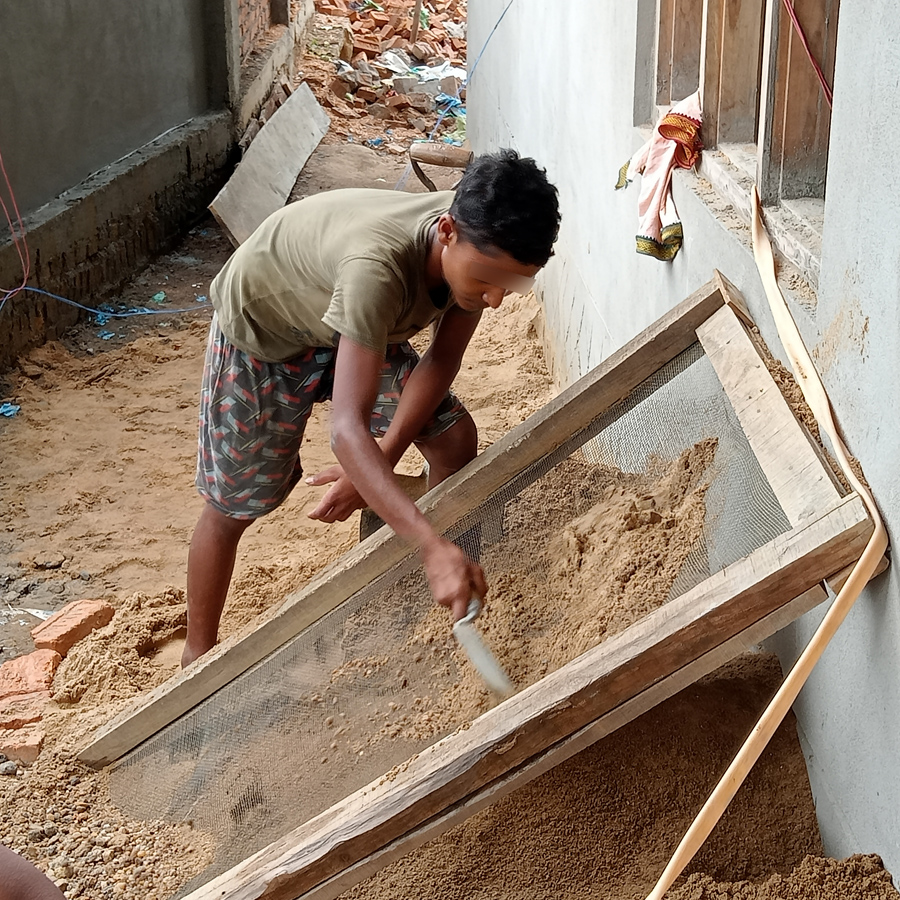 Henlly Phom Odyuo
Dimapur, June 11 (EMN): Despite numerous regulations and laws enacted against child labor, and observing World Day Against Child Labor on June 12 every year to create awareness on the issue as well as find ways to eradicate it, the threat remains.

Krishnan (name changed), a 12-year-old boy, told Eastern Mirror that he was brought to Dimapur by his uncle a few months ago and employed him at a construction site.

Yet to learn Nagamese, he said, he used to help his father in construction works at his hometown in Bihar before coming to Nagaland.

Never having gone to school, he showed no remorse about not receiving education and was content with getting paid at the end of the day.

He said his future is limited to being a construction worker but as a skilled laborer. “I am young now and unskilled but with more work, I will get skilled and my daily wage will increase accordingly,” he said.

Another minor, a 13-year-old who works as a porter for transporting construction supplies, said he started working at a young age.

“My previous job, when I was very young, was to deliver tea from the stall to neighboring shops and offices. In return, I was paid in nominal. But working as a porter is not bad although it requires physical strength, ”he said.

“My whole family (members) are daily wage earners, so it is obvious that I chose this profession. It would be nice to own a shop and be one’s own master. It would be interesting to experience going to school but earning money for livelihood is the priority, ”he said.

Meanwhile, Sonu (name changed), who works at a mobile repair shop, said that studying was ‘not his thing’. He said that he was given a transfer certificate by the school he was studying in after failing in Class 4 continuously.

‘My father changed my school but I couldn’t get through so I gave up and joined the mobile repair shop,’ said the boy who is turning 14 in a few days.

Sandwiched between law and survival

Labor Inspector of Labor department, Dimapur, Lipong Longchar said that most of the underage children were employed at automobile workshops and stores and those employing them were aware of the child labor laws in the country.

However, he acknowledged that employers, parents or children cannot be blamed entirely as poverty drives them to take up jobs at such a young age.

“When we carry out visits to workshops and shops to check the working environment, we find underage children but the employers claim them to be their child or relatives. Most of them are working because of the financial condition and are the breadwinners of the family and this makes it difficult for us to book them, ”he said.

“Giving out notices not to employ underage children is ineffective as at the end of the day, they work for survival and are a support system to their family,” he added.

In Naga society, the practice of child labor is evident in many households and this takes place knowingly or unknowingly, Loza Kape, Childline Dimapur coordinator, told Eastern Mirror.

“Employing a child as domestic help with education is not considered as a case of child labor in the state as Nagas consider that we are doing charity by employing them but whether they provide education (or not), employing an underage is considered as child labor . This indicates that our state has a larger issue of acknowledging that child labor happens in our own kitchen, ”she said.

However, she also acknowledged that the economic condition forces parents to send their children to work as domestic help while receiving education.

“Poverty, in search of a better life with good intentions for their children, most of the economically weak parents take the risk of departing with their children in the care of strangers.

“Government employees, especially those posted in far-flung areas, and missionaries are the major group who act as the middleman in bringing children to be employed as domestic workers and encouraging child labor; and if this is looked at in the eyes of law, it is also human trafficking, ”Kape pointed out.

It is pertinent to note that child labor cases were highest from 2018 to 2019 with 42 cases registered in Dimapur district. Although no latest data on child labor in Nagaland is available, Kape said that as per reported cases, the issue seems to be increasing.

While maintaining that there are not many cases of Naga children engaging in construction work or in the industry sector, she said child labor is like ‘chain-a-family-business’ passed on from father to their children, working together to support the family , while depriving them of their basic rights.

Illiteracy of the parents, especially in rural areas, is one of the factors that contribute towards child labor, she said.

While pointing out the need for sensitization and awareness, Kape said availability of government schools in every village with mid-day meal provision, should be an encouragement for parents to provide education to their children.

Advocate, Dimapur Bar Association, Thejavino Pienyü informed that Article 24 of Indian Constitution clearly states that “No child below the age of fourteen (14) years shall be employed to work in any factory or mine or employed in any hazardous employment”. The Constitution under Article 21 (A) also provides free and compulsory education for children between 6-14 years as a fundamental right.

The Child Labor (Prohibition and Regulations Act), 1986 prohibits the engagement of children under 14 years in certain hazardous and non-hazardous occupations and processes.

Domestic Workers and Social Security Act 2010 (Section 18) also states that no child will be employed as a domestic worker or for any incidental or ancillary work, which is prohibited under any law for the time being in force.

‘Unfortunately, it is estimated that under child labor and exploitation, around 74% constitute child domestic helpers aged between 12 and 16 years. Children engaged in domestic work are living in a situation similar to slavery, and are victims of trafficking for forced labor, ‘she said.

‘These children and their family are often lured and enticed by the agency to give them a better future and education but they are usually sold and resold to different locations as domestic helpers in various homes with a lump sum amount paid by the employers to the placement agents. And the child victims do not receive any type of remuneration. Remuneration meant for them means meals, lodging and everyday needs, ‘the advocate said.

She also pointed out that children employed at private households carry out tasks related to housework such as cleaning, washing, cooking, ironing, taking care of infants, serving the old and disabled sick persons, pet sitting or running errands like shopping etc. ‘With poor diet, malnourished or no proper lodging, the victims are physically, verbally and sexually abused,’ she added.

Jolly Rolnu, Social Worker, Childline Prodigal’s Home in Dimapur, said that there are over 1000 child labor and sexual abuse cases.

“Local and non-local both are equally law offenders. The cases are also mainly targeted from eastern tribes of Nagaland who are sold, promised or lured from Burma (Myanmar) area and are mentioned as Konyaks. Children are physically and sexually abused or impregnated and cases go unsolved in private matters, ”she said.