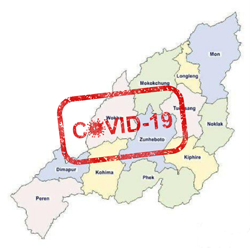 Dimapur, July 30 (EMN): The number of active cases of COVID-19 in Nagaland stands at 93 with 10 fresh infections detected on Saturday. The death toll increased to 765 with one fresh fatality recorded during the same period.

According to an update from the department of Health and Family Welfare, eight fresh cases were reported in Kohima, and one three in Mokokchung and Wokha, in the past 24 hours, taking the total number of cases in the state to 35,775.

The state’s cumulative recoveries also increased to 33,411 with the recovery of 18 more patients in the last 24 hours — eight in Dimapur, six from Kohima, and four in Mokokchung.

Out of 93 active cases, 41 are asymptomatic, 49 mild, two moderate on oxygen, and one severe on oxygen.

In terms of district-wise distribution of cases, Kohima has 42, Dimapur has 19, Mokokchung 10, Mon seven, Wokha six, three each in Longleng and Phek, two in Zunheboto and one in Tuensang.