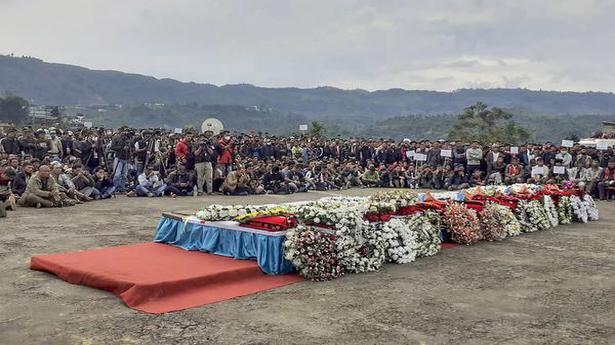 The Naga Students’ Federation (NSF) on Friday asked the Center to set up a court-monitored committee headed by a retired Supreme Court judge or a High Court to ensure a fair and impartial probe into the botched Army operation that led to the death of 14 civilians in Nagaland’s Mon district on December 4 and 5.

In a memorandum to Prime Minister Narendra Modi, the NSF said the Special Investigation Team set up by the Nagaland government could not give justice to the civilian victims of the “wilful acts of the Indian armed forces” insured against punishment by the “repressive” Armed Forces (Special Forces) Act (AFSPA).

The memorandum was handed over to the representatives of the Nagaland Government during a rally organized by the NSF to press for justice to slain civilians, the repeal of the AFSPA and an early solution to the vexed “Naga political problem”.

Similar rallies were held elsewhere in Nagaland and adjoining Manipur in a show of oneness.

The NSF, Nagaland’s apex students’ body, said the Center must admit to the utter failure of its intelligence agencies and publicly apologize to the Nagas “for furthering the subjugation of the Nagas through its policy of militarization”.

“Justice should be delivered immediately to the victims of the gruesome Oting (village near where the Army operation took place) incident and in all the pending cases related to excesses committed by the Indian armed forces,” the NSF’s memorandum stated.

The NSF said there was no rationale behind thrusting the AFSPA on the “Naga homeland within India” by tagging it as a disturbed area when the Naga peace process was at a very crucial stage. “The prevailing law and order situation in the Naga-uninhabited areas does not merit the Act which has only been used as a tool for psychological warfare against the Naga people,” the memorandum read.

It was only because of the AFSPA that the Indian armed forces continue to operate with impunity, it alleged.

The Nagas, during the course of standing up for their unique history and pursuing a common goal, suffered much. The sacrifices of the Nagas, dead or alive, were not a struggle for the Naga identity alone but for self-determination, “a struggle against the imposition of alien culture and values ​​upon us.”

“It is in this background that NSF made its standpoint crystal clear that economic packages or monetary assistance cannot purchase the rights of the Naga people,” the memorandum noted.

The envisaged solution must be mutually agreed upon on the negotiating table and not an imposed one. Rather, the Center should not hesitate in allowing the Nagas to retain their legitimate rights, it added.