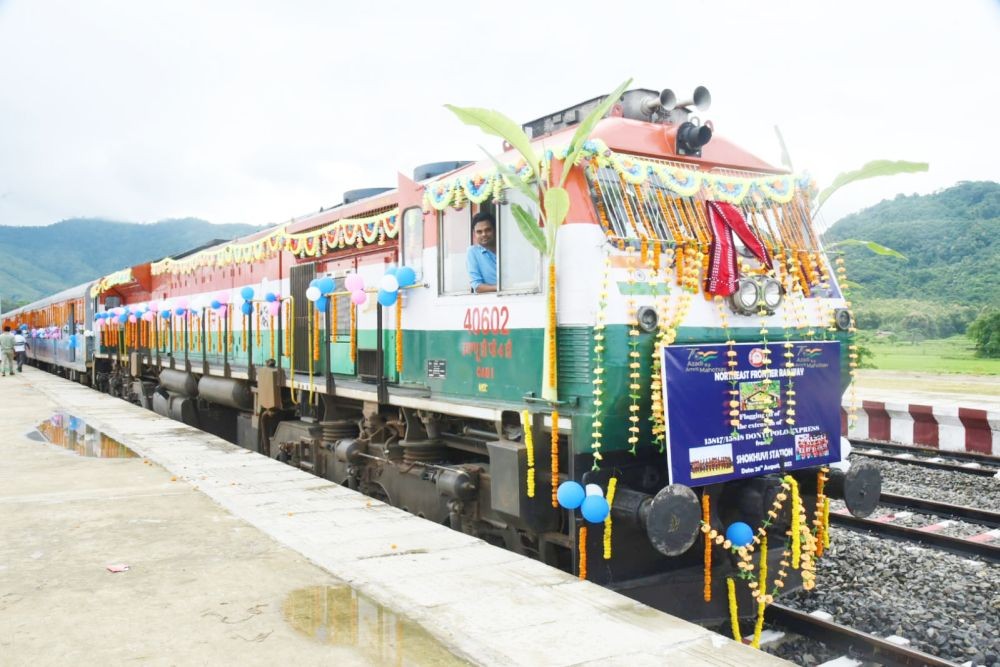 This is a historic day for Nagaland, declared Nagaland Chief Minister Neiphiu Rio, flagging off the inaugural passenger train service from the state’s 2nd train station in Shukhovi, nearly a century and a score after the first station opened in Dimapur.

This day is going to be written in golden letters, echoed the Northeast Frontier Railway (NFR) General Manager Anshul Gupta, as Nagaland’s second station gets “connected to the vast railway network of the Indian railways.”

Earlier, an official of the NFR informed that the first station in Dimapur was established in 1903, which both the CM and GM highlighted during the flagging off program held at Shukhovi Station.

Rio, in his speech, praised the NFR officials, engineers and the staff for making “our dream come true” and launching the Dhansiri-Shukhovi station as the phase I of the rail connectivity till Zubza, which has brought the state capital Kohima closer to the railway network.

The launch of the new station would be of immense benefit for all walks of life, from the neighboring areas to the entire state of Nagaland and Manipur, he said. He further acknowledged that the Railways must have met a lot of challenges in acquiring land for the project, including diversion to the Dhansiri. “Otherwise, you could have finished a long time ago,” he said, adding that the State is glad to see the determination of the Railway Ministry and their officials.

Rio also expressed happiness that the railways have proposed to take the rail connectivity beyond Zubza to New Kohima and onward to Imphal. “We are glad that the vision of the Prime Minister’s Act East Policy which would connect the region not only to the mainland, but also with Southeast Asia,” he added.

This will bring a lot of economic benefits and connectivity, he said, further pointing out that across the world, the development of railways has brought immense benefit in terms of connectivity and economic activities. I further urged for the completion of Phase II to Pherima by 2023 and Zubza by 2026.

The CM also reiterated the Naga people give “a lot of hindrance in acquiring land.” “Land is a big problem,” he said, urging the public to be more supportive. “Every GB, the Village Council, Tribal hohos have to come in so that we don’t create problems, but support them and get benefit as quickly as possible,” he added.

Meanwhile, the Chief Minister stated that the realization of Dimapur to Tizit “announced and also approved in 2012” by the Railway Ministry and later by the erstwhile Planning Commission is the “next dream.”

The region is a mineral belt and a rice bowl because of the foothills and there is huge potential, he highlighted, further alluding that Dimapur and Chümoukedima are relatively more developed as they are well-connected.

Meanwhile, Rio called for ensuring that the Dimapur Railway Station gets its due share of development so that it expands “further and continues to serve not only the residents of Nagaland but also of Manipur & the neighboring districts of Assam.” According to him, the station has improved and has become a lifeline, akin to blood vessels and the connectivity it provides. He further pointed out that the railway services are usually demand-driven, and urged the people to make use of the services being offered now.

The railway going to Kohima reminds me of train rides in hilly Darjeeling during my college days, he said, adding that scenic routes have the potential to attract a lot of tourists once connectivity is done. “Therefore, we must take advantage of this connectivity. I hope the launch of Shukhovi Railway will be a starting point to change the mindset and to bring economic activities down from the farmers to the travelers,” he added.

While acknowledging the completed projects, Rio said that he looks forward to the early implementation of the remaining works.

NFR GM, Anshul Gupta said that the railways are working around the clock on war-footing to connect all the state capitals in a time bound manner. I termed Nagaland as a “most important state for us” as it offers a lot of opportunities not only for the residents of this area, but for the whole country.

“We have already sent a proposal to undertake survey from Zubza-New Kohima-Imphal and Aizawl so that all three states get connected in a loop,” he informed. We hope that once this project comes up and gets commissioned, the North-east will have one of the most sturdy and important railway routes in India, he added.

The GM also maintained that with the “laborious staff” working around the clock, the NFR is working against time to commission the next Molvom station by March/April 2023 and called for support from the people of Nagaland. This is our commitment and beyond that slowly, we will be connecting one station or the other, he added.

Gupta also highlighted that besides the Dony Polo Express, there are plans to introduce new trains including Rajdhani and Shatabdi trains as “we move ahead to Zubza and beyond.” In the future, we will also introduce long-distance trains from the state of Nagaland, he added.

I further emphasized in taking local produce outside. I informed that Shukhovi station has been running freight services by taking stones from Nagaland to various parts of the country and Bangladesh for the past two months.

Earlier, it was being loaded from Assam, but for the first time a new business opportunity has evolved, he said. He also highlighted on Kisan Rail, Food Court as well as One-Station-One-Product initiative, which would boost employment and open new opportunities.

Gupta also informed about a dedicated Wellness-Health Centers at every station for not only passengers, but the people of the area.