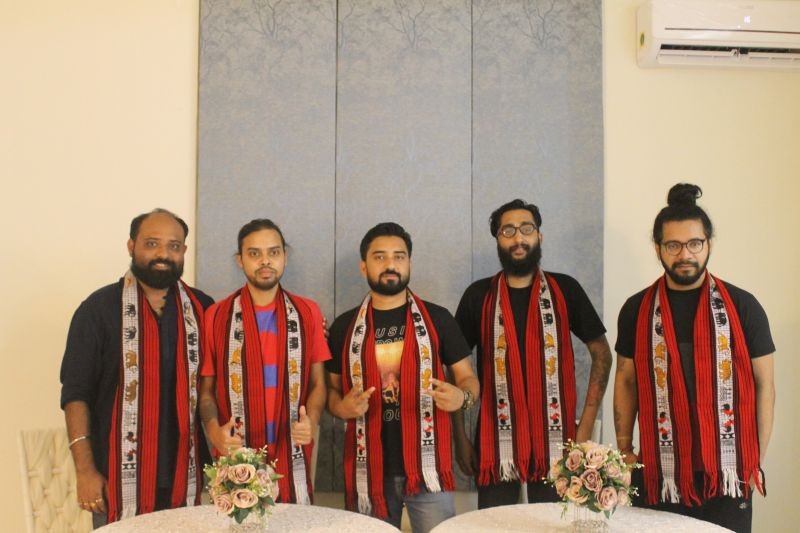 Members of MSonic during the press conference at Happy Nest homestay, Dimapur on August 5. (Morung Photo)

Final touch-ups and preparations leading up to Saturday’s event are underway in Dimapur, dubbed as the “Nagaland for Peace and Harmony,” free concert organized by Dimapur Ao Youth Organization (DAYO) at DDSC stadium. Headliners, MSonic, a fusion rock band formed in Kolkata, have also arrived in Dimapur on August 5 in anticipation of their live performance.

MSonic are a four-piece fusion rock band from Kolkata which consists of Mainak Nandy (lead vocalist), Prasun Bhattacharya (guitarist), Sujoy Maitra (bassist) and Rana Ghosh (Drums). They were also featured on India’s Got Talent in the year 2009 while having toured across countries such as China, Singapore, Thailand and Bangladesh in the past.

Speaking to media persons at a press conference, held at Happy Nest home-stay where the band is being lodged, Nandy, shared his excitement at playing their first show in Nagaland. A native of Assam, Nandy formed the band in the year 2000 when he was still a school student. “It’s been a long journey for me, initially I thought of the band’s name as MalesixSonic but it didn’t sound punchy enough so I shortened it to MSonic,” he said.

Known for infusing elements of Sufi, rock and Bollywood genres into their music, the members have had a wide range of inspirations starting from rock, metal artists to even Indian classical music. “We try to retain all the melodies of our songs while making the music wild and raw,” Nandy added.

The bands have released three albums in their catalog and have toured extensively over the years totaling over 700 shows in different countries.

Commenting on the Nagaland for Peace and Concert, Nandy said that “with this initiative I think the scene is really gonna change for the better and I would like to invite all the people of Dimapur to join hands with us to be a part of this concert .”

On Friday evening as children and young people were seen playing football on the edges of DDSC stadium, officials and organizers on the other hand were busy preparing the stage and sound system for Saturday’s concert.

Akhum, one of the main organizers, explained that everything was so far going smoothly as planned and expected a large turn-out for the event. “We have security both outside and inside the stadium and IRB personnel will be stationed as well if needed,” he said.

In case of unpredictable weather conditions, I also noted that the organizers have made all possible arrangements for protecting the sound system. “The show will start at exactly 6:30 PM tomorrow and will go on for about 2 hours so I’m really excited and looking forward to it,” he added.