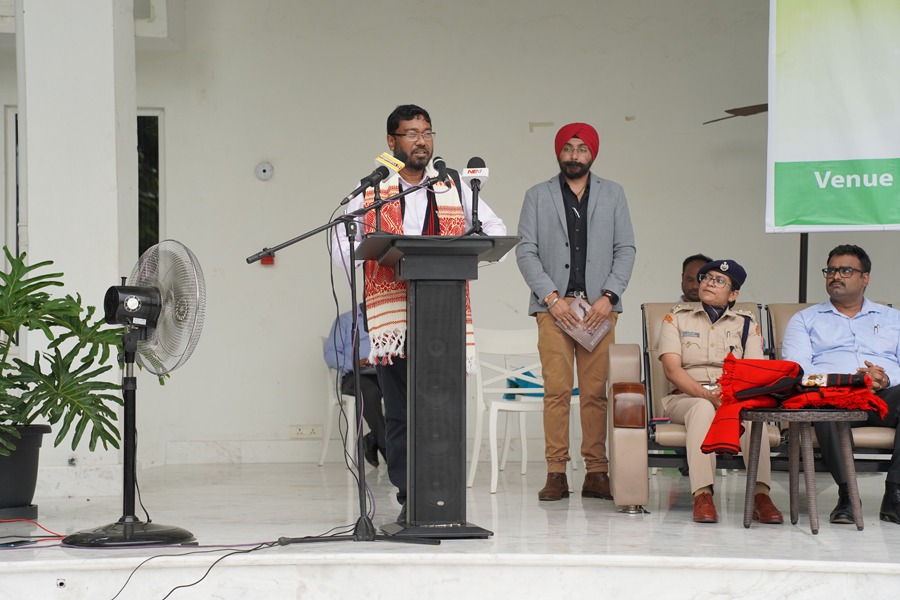 Dimapur, Aug. 13 (EMN): Nagaland has huge scope in oil and gas exploration and the revenue generated from it can be used for development activities, said Minister of State for Petroleum and Natural Gas, Labor and Employment, Rameshwar Teli on Saturday.

Teli said this after inaugurating an LPG (liquefied petroleum gas) bottling plant, being set up by Hemkund Gases, at Virazuma village in Chümoukedima.

Expressing his desire to see oil extraction in Nagaland, the minister suggested the state government to form a company, initiate it or in partnership with an established firm or Government of India by engaging its public sector undertaking.

He said that he already had a meeting with the Natural Gas Corporation, Oil India Limited and Nagaland Chief Minister Neiphiu Rio on exploration of oil and gas, as the state has lost much in the last 30 years because of not exploring it.

Teli disclosed that the CM had expressed the need to discuss with the industry people and “others” first before going ahead with the proposal. He added that he had met with the Minister of Petroleum and Natural Gas Hardeep Singh Puri, conveying his desire to begin the gas exploration and the talk was on.

The minister said that he came to inaugurate the ‘first LPG bottling plant’ in the state although it’s a private company, as he wanted the people to change their perception on industrialisation, and also because someone from Ranchi is establishing a plant in the state.

He also informed that the government and India has set up a company called “Indradhanush” with the intention of connecting the north-eastern states with piped gas, which will reach Kohima.

He went on to seek the help of Chümoukedima Deputy Commissioner in assisting unorganized workers to register for e-Shram cards.

“Our target is 38 crore registration and 28 crore has been achieved, which is free. If laborers exceed 60 years, they will receive a pension of INR 3000 per month, for which they need to deposit INR 55 monthly,” he informed.

‘There is a misconception about Nagaland’

Zorawar Singh, Managing Director of Hemkund Gases which is a private LPG distribution company dealing in both commercial and domestic cylinders, said that there are lots of private bottling plants in central India but not in Nagaland, so the firm decided to set up the LPG bottling plant

The company has bottling plants in Ranchi, Kolkata and now in Dimapur, and also setting up one in Lakhisarai.

“A lot of places have matured when it comes to private companies and there is a misconception about Nagaland, and when we came here, we did not see much of private plants and eco system is not so mature so we thought there is an opportunity here ,” Singh said on choosing the state for setting up the plant.

With around 10 to 12 distributors in Dimapur and Chümoukedima, the Hemkund Gases will generate employment not just for those working at the LPG plant but those working with our dealers and there will be end-to-end employability, he stated.

On the storage capacity, I said the LPG bottling plant has around 40 metric tonnes of storage and around 2000 cylinders for cylinder storage but added it all depends on the amount of rotation.

He went on to say that the company has obtained the license, so it will start as soon as possible and planning to cover the entire Northeast.

Last Chance for These Small Business Grants in January