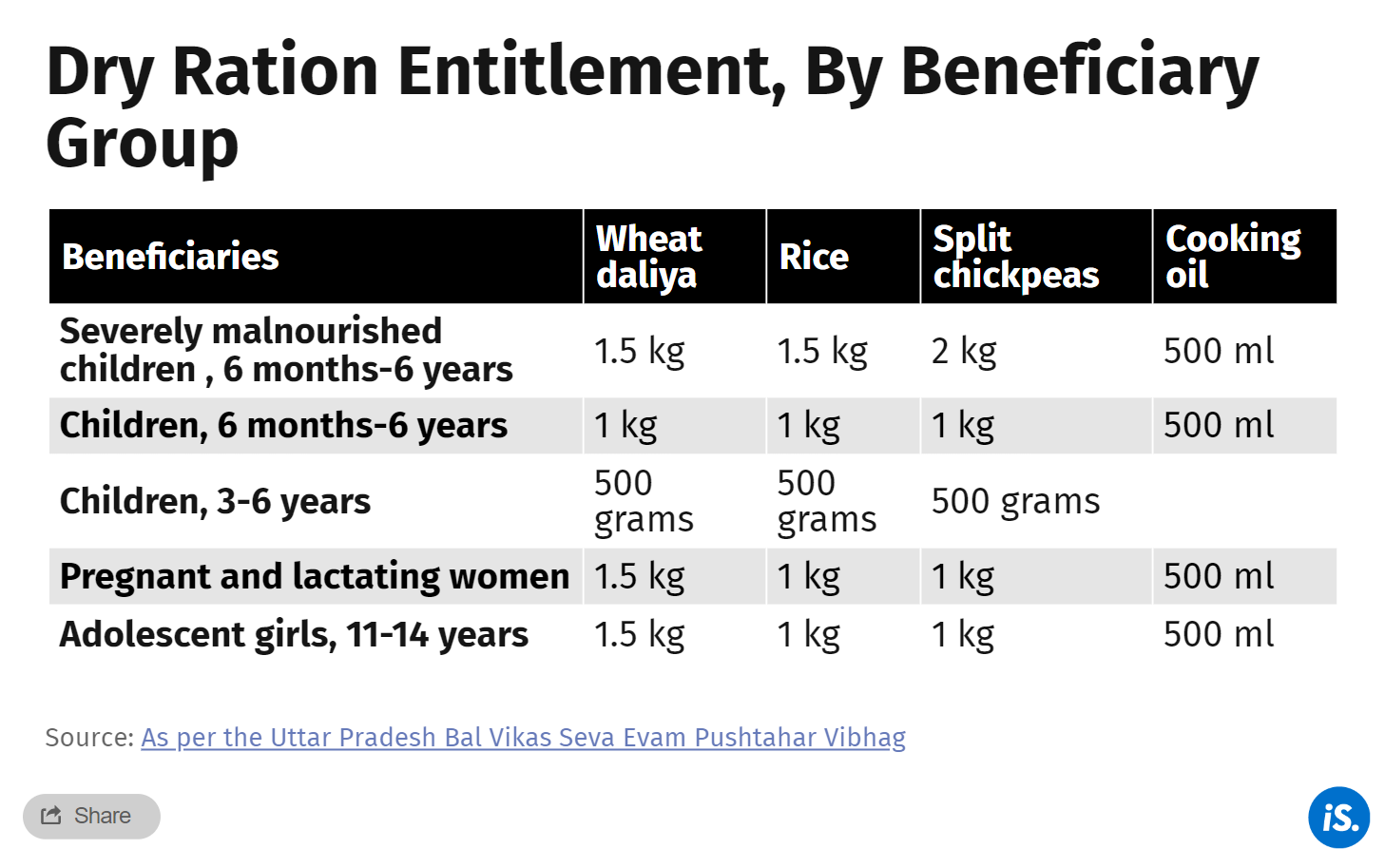 “I am four months pregnant” Roshni Rawat, 27, who lives in Habibpur village in Lucknow, told IndiaSpend in June. “I should get dry rations from the anganwadi every month. But this time I got ration just once in two months. How will I manage? ” Roshni has two children, a four-year-old and a one-year-old who is severely malnourished.

To tackle widespread malnutrition, dry rations are distributed in Uttar Pradesh through its 1,89,000 anganwadi centers. Known as anupurak pushtahar or supplementary nutrition, these are provided to children between the ages of six months and six years, pregnant and lactating women, malnourished children, and adolescent girls between the ages of 11 years and 16 years. This is part of the Integrated Child Development Services, which provides education and health services for children and mothers.

Rawat is herself entitled to get 1.5 kg of wheat daliya, 1 kg rice, 1 kg chana dal (split chickpeas) and 500 ml cooking oil from the anganwadi every month. However, after April, Rawat got these rations in June.

Severely malnourished children should get 600 calories and 20 grams-25 grams of protein every day, as per the Uttar Pradesh Bal Vikas Seva Evam Pushtahar Vibhag guidelines. However, it would be difficult to meet these standards if the beneficiaries are not getting rations regularly.

However, in many districts of Uttar Pradesh – where 39% of children under five years are short for their age, and 32% are underweight for their age – the quantity of rations anganwadis receive falls short for the number of beneficiaries registered at the centers, anganwadi workers in several districts told IndiaSpend.

Eight months back, 23-year-old Roma Yadav gave birth to a baby, Shrishti, in Habibpur village in Lucknow. When she was born, Shrishti weighed just 1.5 kg – considered low birth weight, according to the World Health Organization criteria (less than 2.5 kg at birth).

Hence, the anganwadi worker in the village put her in the “severely malnourished” category, and as per norms, six months hence, Shrishti should have started getting 1.5 kg wheat daliya, 1.5 kg rice, 2 kg split chickpeas and 500 ml cooking oil .

“We have received rations just once in two months,” Yadav said IndiaSpend. “The anganwadi worker says they are getting less rations for distribution. God knows what the truth is. ”

Anganwadi workers say they are receiving lower quantities of dry rations. Therefore, they have to choose how to distribute it among the beneficiaries, and often have to deal with the ire of villagers.

“People unfairly blame us and say that we are siphoning rations meant for them,” said Urmila Maurya, an anganwadi worker in Lucknow’s Habibpur village. “That is not true. We distribute all the rations we get. ”

“I got rations for 66 people in May,” Maurya said. “There are 100 beneficiaries under me. These include 74 children between the ages of six months and three years, 22 pregnant and lactating women and four severely malnourished children. Whom do we give the rations to? ”

In order to distribute rations among all the anganwadi beneficiaries, Urmila distributed the rations for May and June together. By doing this, she ensured that all families still received some rations. When the beneficiaries questioned her on the quantity, she told them that she got less ration for distribution.

Like Urmila, Geeta Pandey, an anganwadi worker in Chitauni village in Gorakhpur, also has to distribute less rations than due to people. She receives rations for about half of the beneficiaries – or six of 12 pregnant women, 30 of 60 children who are six months to three years old, and for 16 of 48 children who are three years to six years old.

“We have to face many difficulties,” Pandey said. “We have to pick and choose and distribute rations among pregnant women. Every time, we have to tell them that we receive less rations from the government. ”

At Uttar Pradesh’s over 1,80,000 anganwadisnearly 1.5 crore beneficiaries received dry rations through these anganwadi centers in July 2021, as per data provided to IndiaSpend by the Uttar Pradesh Bal Vikas Seva Evam Pushtahar Vibhag. This number keeps fluctuating, and so every three months, new beneficiaries are added and the names of those who are ineligible are removed from the list.

“There are enough rations. Every three months, we take stock of the situation and provide the list of beneficiaries to our suppliers, ”said Sarika Mohan, director of the UP Bal Vikas Seva Evam Pushtahar Vibhag.

Earlier, children used to get a mixture of grains at anganwadi centers, called panjiri. But because of irregularities in procurement and distribution, in September 2020, the UP Uttar Pradesh Bal Vikas Seva Evam Pushtahar Vibhag reportedly ended the 29-year-old monopoly of the companies that would distribute this panjiri and decided to distribute dry rations with the help of women from self-help groups.

As per this new arrangement, it was decided to set up poshahar units in different districts, which would prepare daliya and distribute it to the anganwadis. Until these would be set up, the government said it would distribute dry rations through anganwadis.

However, poshahar units are still under construction. The Uttar Pradesh State Livelihood Mission was to set up 204 units in 43 districts. IndiaSpend had reported in September 2021 that after one year of the announcement of the scheme, only two units had been set up, under the A World Food Program.

Sarika Mohan, the director of the Uttar Pradesh Bal Vikas Seva Evam Pushtahar Vibhag, had then told us in September 2021 that poshahar distribution in 43 districts would begin in three to four months. However, when we contacted her in July 2022, she said the Uttar Pradesh State Rural Livelihood Mission was responsible for activating the Poshahar Units. As per the information provided, 34 units were set to be operational by June end.

Adeel Abbas, who heads the Poshahar unit program of the Uttar Pradesh State Rural Livelihood Mission, told IndiaSpend in July: “Thirty-four poshahar units are ready. They will be operational in a month. Presently, we are in the process of procuring ration and providing training to women. ”

This article first appeared on IndiaSpend, a data-driven and public-interest non-profit journalism.

Omicron begins to retreat to the United States, shows data