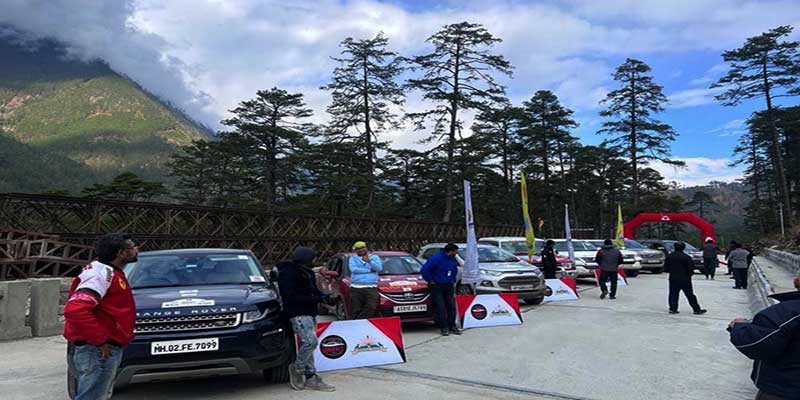 Gumball India 2021 started its journey this year from Koteshwar to Gujarat’s Kutch district on December 24th. The sixteen participating teams have faced a tough 4,000-kilometer non-stop run to finish in this year’s race. Drivers from various cities such as Guwahati, Kolkata, Delhi, Jammu, Hyderabad, Bangalore and Kochi took part in this year’s event.

The event was marked from Gujarat on December 24, participants traveled 4,000 km non-stop and drove through places of historical importance that culminated in Arunachal Pradesh.

The event was part of the ‘Aazadi Ka Amrit Mahotsav’-Celebration of the 75th anniversary of India’s independence under the Arunachal Pradesh tourism initiative to promote national tourism in the state.

Padma Deepa Malik is the first Indian woman to win a medal at the Paralympic Games and through her NGO Wheeling Happiness is working with people with disabilities for universal inclusion, awareness and disability rights.

Speaking at the event, Deepa said: “When I started participating in car rallies, I was the first and only paraplegic woman to do so and I am very happy to promote the same passion for adventure. “Motor sports among people with disabilities through my foundation. Rolling happiness to break stereotypes. I’m so excited that so many people with disabilities have come forward to explore driving and adventure.”

This time, a participating woman with different abilities, Saumya Davar, undertook this challenging momentum of endurance; and the second team was led by Joginder who was a passionate driver before his injury and with our support he returned to the roads for the first time since he became paraplegic. It was also very exciting for our Digvijay & Prashant team from the first edition to return to Gumball 2021 once again.

At the 2nd edition of Gumball India, this year, participants covered more than 4,000 kilometers, almost non-stop, and reached the finish line. The teams sailed through fifteen secret checkpoints along the path that was revealed to them at the start of the event. Participants could do any route they wanted, but they had to register at all intermediate checkpoints.

It was a real endurance test with 82 hours of non-stop driving through Rann of Kutch, Aravalli Hills, historical monuments of Madhya Pradesh, plains of Bihar and Assam. The event culminated with the raising of the Indian flag in the village of Kaho in Arunachal Pradesh and the singing of the national anthem by the Indian army.

The winners of this year’s general category event are:

The winners of this year’s special event are: 1st Able Warriors, Prashant Gaukar and Digvijay Singh Nagpur and Haridwar, 2nd Ace Joginder Singh and Yashwardhan from Hyderabad and Jamshedpur and 3rd Living Life on Wheels, Somya Davar and Shivam Saluja, Delhi. in Jaipur.

The award ceremony was held at the Golden Pagoda, Namsai, with District Commissioner RK Sharma and Superintendent of Police Dr. D. W Thungon handing out the trophies to the winners. Last year the event started from Kanyakumari. The next edition of Gumball India will return in 2022 with a tougher endurance challenge. adventures and adrenaline rush.