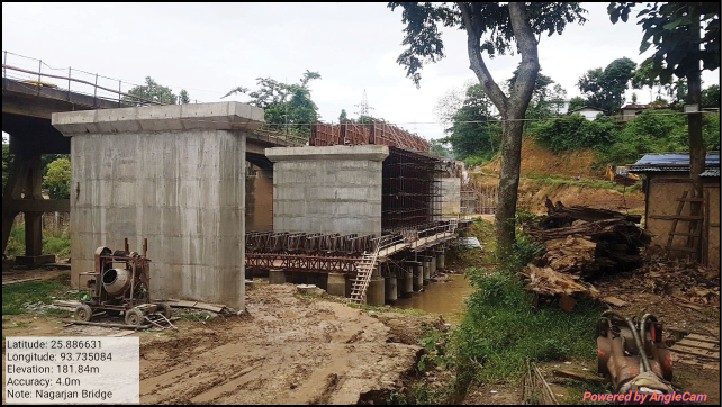 Dimapur’s arterial routes to the rest of the state have been choked for several years now due to two of major three bridges over the Dhansiri River either closed or limited to traffic for repairs, and another over the Chathe River collapsing.

Commuters could, however heave a sigh of relief in about a year’s time, as rebuilding of these bridges are ‘nearing completion,’ according to an update of the ongoing works by The Morung Express.

Two of the bridges, currently under construction — one at Kuda village over Dhansiri and the other at Diphupar B near Christian Institute of Health Sciences & Research over Chathe — are poised to be completed by April 2020.

The other Bridge over the Dhansiri connecting Purana Bazaar and Super Market may be completed by year end or January of next year.

Expressing satisfaction over the progress of works at Kuda Village as well as Chathe, the Executive Engineer, Dimapur Division (R&B), Er Talitemsu Jamir informed The Morung Express on Tuesday that construction of both the bridges would be completed by April 2020 if ‘weather conditions are favorable. ‘

The estimated cost of RCC Girder Bridge over the Dhansiri as per the Detailed Project Report is Rs 3794,832 lakh (38.94 crore), but it is likely to be escalated owing to the soaring cost of materials and transportation. While the work order for the project was issued in June 2016, it started in October 2017.

The current National Register of Citizens (NRC) exercise in Assam was cited as one of the reasons for the delay as laborers, mostly from the state, had to go back for the exercise resulting in shortage of workforce, the EE said.

Another reason he cited was the frequent bandh on sand supply from Assam.

The unavailability of steel required size used in construction in the local market was also another constraint as the contractor had to procure it from Kolkata and Guwahati.

So far, an amount of Rs 9.50cr has been released and approximately 60% of the works has been completed.

Structure-wise, the EE informed that the pile foundation for the bridge is mechanically driven with a depth of 12-15m and the two-lane bridge measuring 120m in length and 12.75m from edge to edge breadth wise. ‘Once completed, it would have a life-span of 100 years,’ he maintained.

Meanwhile, another officer of the Department, who is supervising the construction, said that the work progress was “very good” and added that the piling and abutment has been completed and cast decking (super structure) has started.

The two-lane bridge, measuring 100m in length and 12.75m in breadth, over the Chathe River is also slated for completion by April 2020, although the initial target was December 2019.

The initial estimated cost of the project was Rs 3765.99 lakh (37.64cr) but this is also likely to escalate owing to rise in price of construction materials and transportation.

A total amount of Rs 8 crore has been released so far and 60-65% of total works has been completed. While the work order was issued in 2016, the works started in October 2017 and the delay was attributed to land acquisition issues.
Even before the bridge collapsed on July 11, 2017, the R&B Department was seeking alternate location for new bridge construction, Er. Talitemsu claimed.

“The old bridge was still in use and dismantling it for constructing the new bridge at the same location would have cut off the entire route. However, even before any concrete steps could be materialized, the old bridge collapsed and it was decided that the new bridge would be constructed at the old location, ”he added.

After the collapse, the R&B Department built a Bailey bridge over the river in three months. The Department had also constructed a blacktopped approach road to the Bailey bridge spanning 450m.

Although the work order for construction of the bridge connecting Super Market and Purana Bazaar was issued in 2009, actual work started only in January 2017.

The bridge construction is being supervised by the Urban Development Department (UDD), Government of Nagaland and the funding pattern is on the basis of 90% central share and 10% state share. The work was awarded to M / S Aien Meren Enterprises.

Speaking to The Morung Express on July 23, Urban Development Officer, Akok Aier informed that the stretch of road where the bridge is being constructed belongs to the National Highway but maintained by Border Roads Organization (BRO).

According to the officer, complications arose when the UDD procured No Objection Certificate (NOC) from the Roads & Bridges Department but this was objected by the BRO.

It took six years to get clearance from the Ministry of Road Transport & National Highways until it finally got the NOC in 2016, he maintained.

As per terms of the contract, the timeline to complete the project was 24 working months excluding 10 rainy months and it should be completed by April 2020.

However, during one of the coordination meetings with the district administration, the contractor assured of completing the project by December 2019 or January 2020, he informed.

Initially, the estimated cost of the project as per the Detailed Project Report was Rs 9 cr but it has been revised to Rs 13 cr. The length of the RCC Beam Bridge is 72m while the breadth is 18 feet for vehicular movement and 4 feet each on both sides of the road for footpath. Once completed, the lifespan of the bridge is expected to last 50 years.

The amount of money released so far is more than Rs 6 cr; that comes to around 50% of the total amount of the project and the works completed is 60%.

Aier said the amount released so far is commensurate with the works done and added that the abutment (sub-structure) of the bridge at one end of the bridge has been completed while the other side would be completed by August this year.

The ball is in the court of the contractor for early or timely completion of the project since payments are made on time and there is no other excuse for delay except owing to unfavorable climatic conditions, he added.

7 Fat Burning Foods You Need To Add To Your Diet