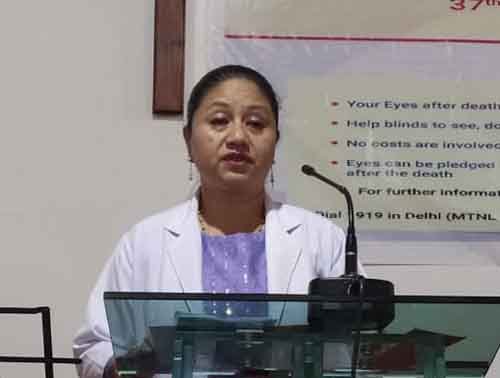 An update from the chief medical officer (CMO) of Dimapur informed that senior specialist at DHD, Dr. Asonla Aying, who spoke on the theme stated that “our eyes can continue to live on even after death if we donate our cornea to a needy beneficiary.”

Dr. Asonla said the main aim of observing the National Eye Donation Fortnight was to create awareness on the importance of eye donation and also to motivate and inspire people to pledge their eyes for donation after death. She also informed that through the campaign, the country aims to reduce blindness level 0.3% prevalence in the country.

As there is a huge gap between the demand and supply, she said she urged the community to pledge their eyes for donation.

Dimapur district first collected from a donor on November 21, 2012, with a team led by Dr. Sukhato, former chief medical officer, Dimapur, and has since collected from 16 donors so far, it stated.

She also mentioned that there is a Hospital Cornea Retrieval Program (HRCP), which aims at the retrieval of cornea tissues from willing and eligible donors after death in the hospital.

“Eyes can be retrieved successfully from six to eight hours after death. Any person willing to pledge for eye donation may collect the pledge form from DH Dimapur eye OPD during OPD hours,” it stated.