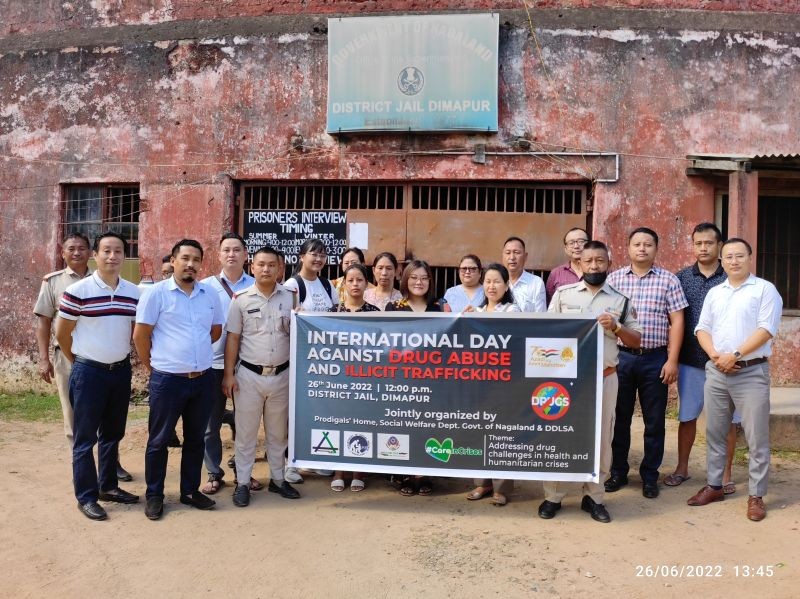 Organizers and Jail authorities during the event on June 26.

According to a press release, Mongro emphasized that mental health problems get more aggravated with the abuse of drugs or alcohol. She shared that depression, suicidal ideation, anxiety disorder and psychosis are some common mental disorders that afflict persons who are addicted to drugs. She appealed to not judge an addict by their drug abuse status but view them as individuals who might have gotten trapped in the world of drugs owing to some problems for which they did not receive help on time. Instead of judging, we should be finding alternatives on tackling the threat of drug abuse, she stated. She also stressed the need to have a medical Doctor on call at the Jail for prisoners being brought to the jail with addiction history.

Keneikesangulie Zumu, DWO, Dimapur, Department of Social Welfare, delivered the keynote address while Sangto, Project Assistant, DDLSA spoke briefly about the Constitutional provisions protecting human rights and dignities of every citizen. He also shared how DDLSA is there to provide free legal aid to those persons falling under certain categories.

Sani from Prodigals’ Home presented the welcome address while Mhonbeni (Chaplain) and Atula (Counselor) of District Jail pronounced the invocation and benediction respectively. The Program was chaired by Sukum, Prodigals’ Home, the stated release.