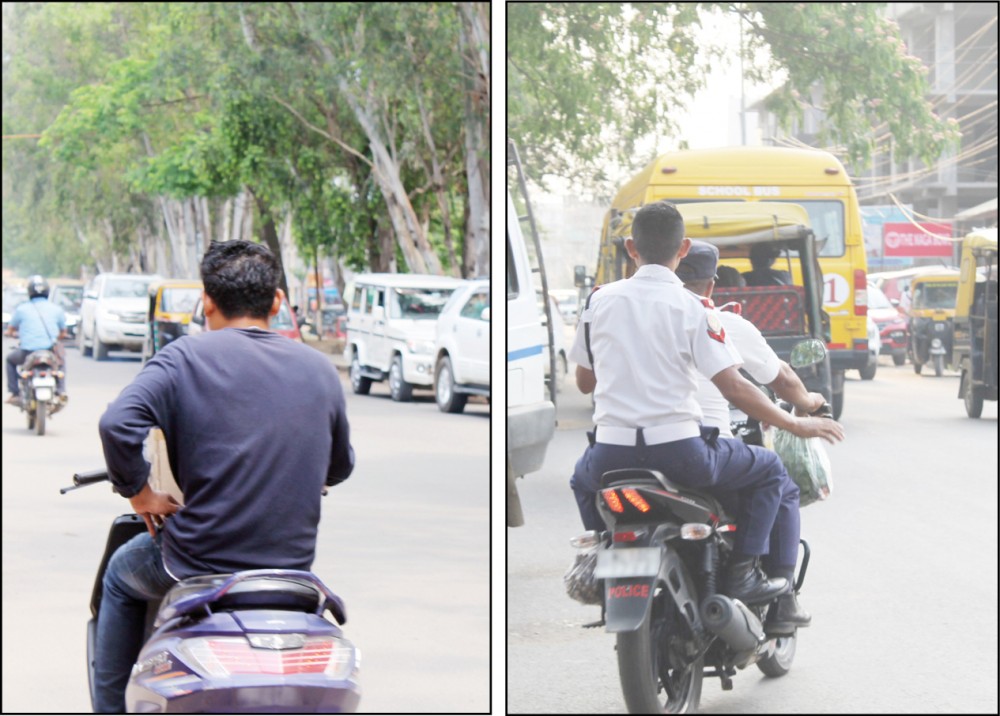 Both public and police continue to disregard road safety measures

Excessive honking, driving in the wrong lane, over-speeding, and not wearing helmets are just some of the violations, car owners and two-wheeler drivers in Dimapur are notorious for, when it comes to disregarding traffic norms. Even enforcers are sometimes at fault.

Despite rigorous penalties for violations laid out under the Motor Vehicles Act (Amendment), 2019, and relevant notification by the concerned authorities (See Box), such violations continue.

This is attested by the surge in road accidents in the recent past owing to the recent four-lane construction and road repair within Dimapur city.

While Dimapur Police has experimented, among others, with the introduction of speed limits within the Dimapur city and NH-29 up to Chümoukedima, as counter measures, there is no let up.

Accordingly, The Morung Express spoke with Bharat Laxman, DCP (Deputy Commissioner of Police) Crime & PRO of Dimapur Police to understand the gravity of the situation.

The implementing strategies by the law enforcement agency pertain to two methods — creating awareness through government notifications as well as the media and deterrence in the form of imposing challans for violating the law, he explained.

“We have been doing awareness practices for road safety for a long time in Dimapur, apart from that, Ministry of Road and Transport, as well as central and state agencies are also doing a lot of awareness campaigns,” he added.

Moreover, challans are imposed on those not following the law, he underscored.

Records, however, illustrated that such strategies have had little effect on the ground as the general public are frequently seen violating traffic rules.

According to data provided by the Dimapur DCP (Traffic), in the first quarter of 2022 (Jan-March), there were approximately 4200 defaulters alone, including 600 two-wheeler riders.

Besides that, the Dimapur police also recorded about 219 accidents during the same period.

As a case in point, during the early hours of May 12, a newspaper delivery van nearly had a head-on collision with a bike near 4th Mile area.

According to the driver of the van, both the rider and his co-passenger were in an inebriated state during the time of the incident and the bike was driving in the wrong lane, coming from the opposite direction.

With heavy rain reducing visibility, the bike driver rider lost control and it skidded towards the van, nearly hitting it while the rider and his co-passenger received minor bruises.

No case was registered as the occupants of the bike left the scene promptly after the accident.

“It still puzzles us as well,” admitted Bharat, on the frequent traffic violations, as “there is a lot of awareness being created, both from the government and the media.”

Nevertheless it was observed that besides common citizens, some police personnel were also found wanting of not wearing helmets or following traffic norms with regard to safety standards.

To this, the Dimapur Police PRO asserted that “the law does not differentiate between the policemen and the common citizens.”

“If it is brought to our notice then we will take necessary action against our police personnel,” he maintained.

While noting that factual inquiry needs to be done in regards to the cause and the effects, he said that such a step “cannot be an excuse for other people not wearing their helmets.”

Not ‘all doom and gloom’

Concerning the recent implementation of a speed limit within the jurisdiction of Dimapur for a period of one month, it was learned that the policy received mixed reactions from the public.

This was due to the fact that a substantial number of drivers from other districts and across state lines travels to Dimapur every day. Therefore many are not aware of it or simply disregard the rules entirely, the PRO reasoned.

He, however, informed that the police have submitted their report to the government for further consideration on whether or not to extend it.

Despite challenges faced by the police, Bharat further maintained that it is not “all doom and gloom” as made out to be at face value.

“It is not that everyone is violating the law; there are also a lot of people who are adhering to it willingly, ”he elaborated.

Unlike earlier times, where a lot of crime went unreported due to limited media coverage, the advent of social media has widened the scope of reporting crime within the city, he added.

“That way, we think that the crime rate is increasing but I think that this is a good trend that more of that are getting reported,” noted Bharat.