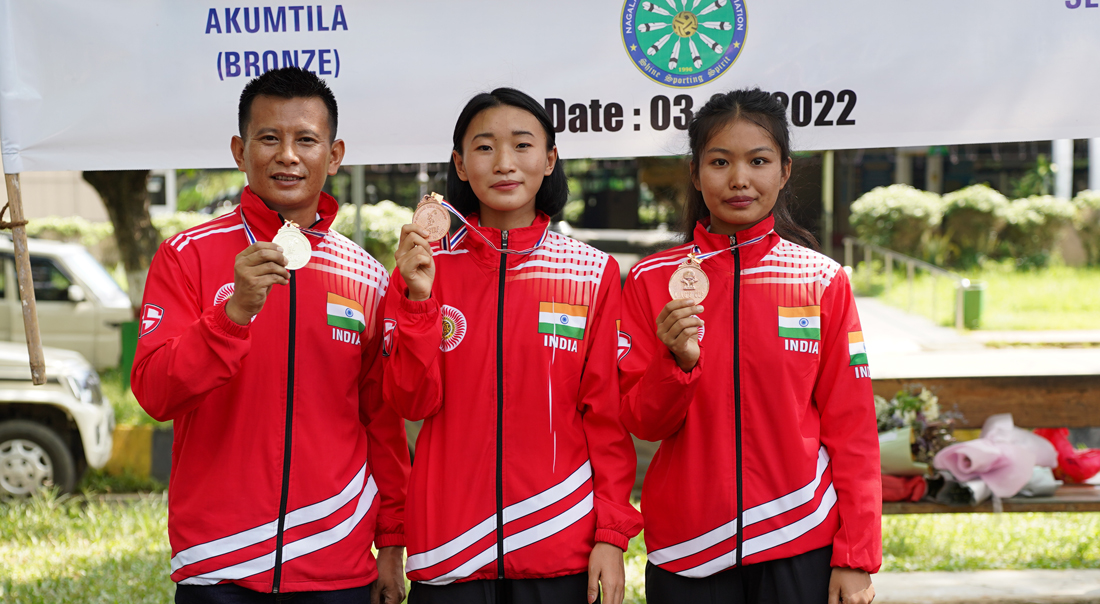 The international tournament was held from July 23 to 31, where

Viseyie Koso from DGP sports team and the captain of the Indian team won gold in the men’s Regu event while and Akumtila and Sezovelu Dozo from the department of Youth Resources & Sports, Nagaland Girls Academy, Dimapur, won bronze in the Hook Takraw event.

Deputy Commissioner Dimapur, Sachin Jaiswal, congratulated the athletes and congratulated them for bringing laurels not only to the state but to the entire country. Jaiswal shared that even though Nagaland is a small state where the sporting infrastructure may not be at par with other states, yet their tremendous achievements have made the state proud.

Gold medalist Koso said the team started preparing from December 2021 for the Asian Games, but since it was postponed they instead participated in the Kings World Cup.

Akumtila conveyed gratitude to her coach for training them for so many years and assured that she will work harder in the coming days to bring home better medals next time.

Dozo also expressed thanks to God and also her coach for never giving up on them and making them one of the best players in the world.

Speaking about the facilities in the state, she shared that they are used to practicing in kaccha playgrounds in the state, and so when they go to good stadiums, they face problems and take time to adjust.

Meanwhile, she also thanked the state government for giving them the opportunity and assured to work harder and bring better results in the future.

Holshe Khrieo, the coach said his players are all hardworking, dedicated and disciplined, which are the most important qualities to win medals. He said Koso has been playing Sepaktakraw for 20 years and after so many years, he won a gold medal.

I shared that Akumtila and Dozo were selected from the many players by the Indian sepaktakraw federation and they were in the Indian camp for five months.