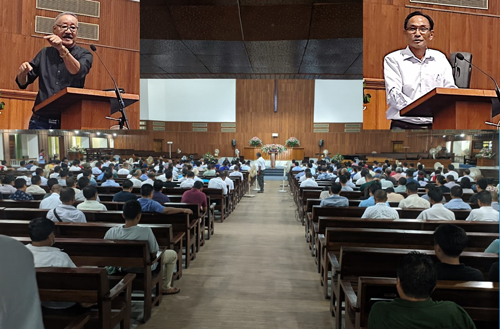 An update stated that he highlighted the role played by the church and Christians in bringing revolutions through the centuries.

The church, he said, needs to play the pivotal role to bring changes in the corrupt system of conducting elections in the state. Aier also emphasized on checking and reflecting one’s theology. I stressed that Christianity in Nagaland had become a “cultural Christianity”.

“Christians are reluctant to take up social responsibilities. The haves don’t want to stir up problems and tend to maintain status quo. Politics is a way of life but for Nagas, politics is dirty,” it stated.

In the second session, Talitsungba Ao, lawyer, spoke on the topic “Clean Election: Legal and Pressure Groups.” He spoke on the role of the church as a moral educator. He said that the church believes in morality and divinity, ‘must devise means and propagate for reformation from within and not from external pressure’. He said that religious organizations and civil societies propagating the moral education based on divine principles would be of indispensable supplement to the legal force in matters of electoral offenses, he added.

The seminar was attended by the leaders from 35 unions and village councils, and 29 Ao churches, it stated.