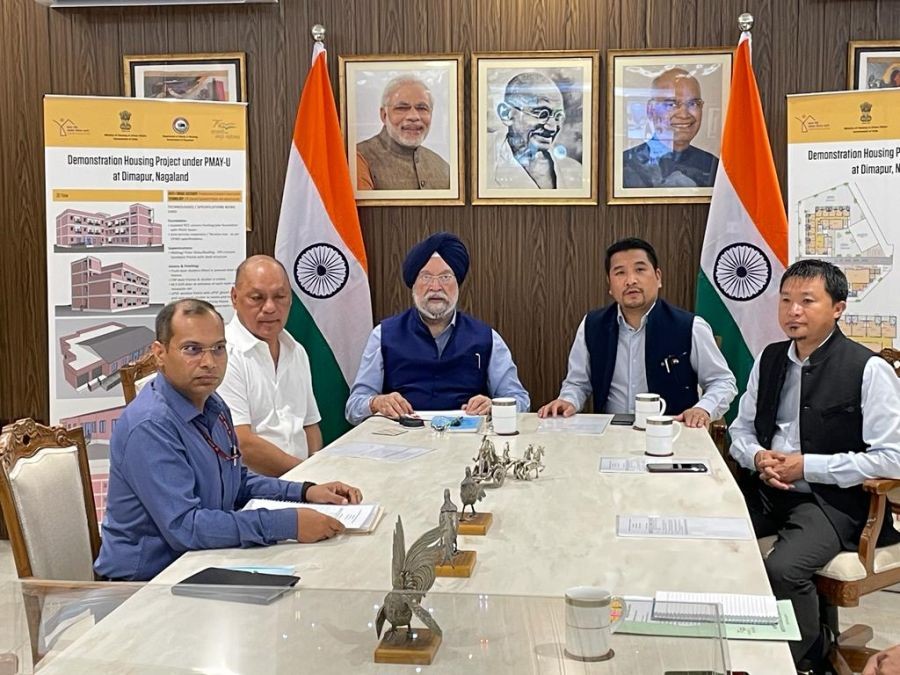 Union Minister and officials during the foundation stone for a ‘Demonstration Housing Project’ in Dimapur, under the aegis of the Pradhan Mantri Awas Yojana-Urban laid on June 25.

The foundation stone for a ‘Demonstration Housing Project’ (DHP) in Dimapur, under the aegis of the Pradhan Mantri Awas Yojana-Urban (PMAY-U) was laid on June 25. Union Minister for Housing & Urban Affairs, Hardeep Singh Puri, joined from Delhi to virtually lay the ceremonial stone for the project located at the PWD Housing Complex, Sematilla.

Nagaland Minister for Housing & Mechanical, Tongpang Ozukum, who was in Delhi, was with Singh to complete the formalities.

On site, in Dimapur, state officials were led by Secretary, Housing, Kesonye Yhome along with the Chief Engineer, Housing, PWD. With a builtup area of ​​2050 square meters, Ministry of Housing & Urban Affairs is the funding agency. As per the on site signage, it will use emerging green technology and will feature rain water harvesting, solar street lights and solar water heating systems. The work was awarded to I Kronu & Co, Kohima at a total “tendered cost of Rs 1085 lakhs and completion timeframe of 10.5 months. When complete, it will serve as a working women’s hostel.

According to Singh, the DHP, an initiative under the Technology Sub-Mission “reflects the government’s philosophy to pilot innovations and build local expertise.” He said, The Building Materials and Technology Promotion Council (BMTPC) have been handholding these Demonstration Housing Projects, and have helped in raising awareness about new construction technologies across India. Most of the states are adopting new construction technologies today. Under PMAY (U) alone, more than 16 lakh houses are being constructed using green technologies. ”

He informed that more than 60 lakh houses of the 1.23 crore houses approved under the PMAY-U have been handed over to beneficiaries while another 40 lakh houses are being constructed. IN Nagaland, he added that more than 75 housing projects have been considered for a total of 32,335 houses. “A critical aspect of mission implementation has been the shift from age-old construction practices to newer and greener construction processes that are more sustainable,” he said.

Kesonye Yhome, Secretary, Housing & Mechanical, termed the emerging building technology as safe and sustainable “in the sense it is more eco friendly because the raw materials which are prepared are not extracted from natural resources.” While stating that it suits Nagaland, which is located in a seismically active zone.