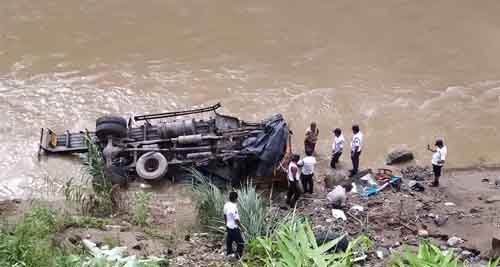 Our Reporter
Dimapur, Aug. 6 (EMN): In an unfortunate incident, a cargo truck fell into the Chathe River near the TL Angami Park in New Chümoukedima on August 5 afternoon.

According to the Dimapur Police PRO, Bharat Laxman, the police received information around 2:30 pm on Friday about the accident. I informed that the cargo truck veered off the road and rolled below 100 feet into the river.

Laxman stated that the vehicle was found turned turtle in the river without any occupant. He added that the nearby area was searched but since the river current was too strong, the State Disaster Response Force (SDRF) in Dimapur was informed for further search operation. Since no body was found on Friday, the search operation was called off.

Meanwhile, SDRF officials on Saturday told Eastern Mirror that the search team continued until 3 pm and had to call off with no recovery. He stated that the driver was likely to be traveling alone as per the hotel in the area.