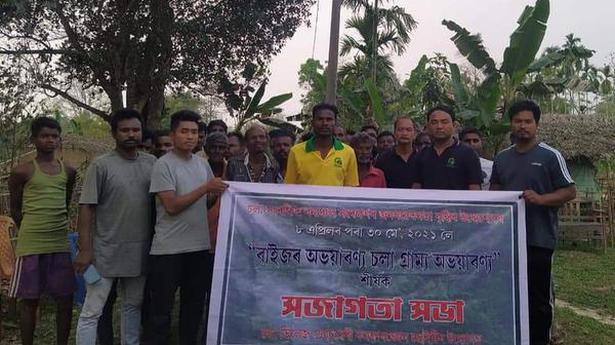 A creeper that once gave the monk’s robe its saffron hue has led a Buddhist village in the Charaideo district of eastern Assam to adopt a forest.

Five years ago, the monks of a 152-year-old Chalapather Shyamgaon Buddhist monastery had lamented the near extinction of bhungloti, a thread that, in combination with the marrow of the roots of a jackfruit tree, gave a saffron dye for her clothes.

The women of the village also lamented how to get vital ingredients from four native plants to dye them flags, a traditional garment, indigo blue became increasingly difficult.

“The concern of the monks triggered a movement to preserve the forest of the Chala reserve, the traditional source of most of the colors of our lives. And in September 2018, people from ten surrounding villages gathered to do something, ”said Pyoseng Chowlu, secretary of the Chala Village Shrine Conservation Society. The Hindu.

The society was formed a month after that meeting, where the 683,173-hectare reserve forest of the Sivasagar Forest Division was declared a Sanctuary of the village of Chala. A forest protection party of 22 village members was also set up to help the understaffed Forest Department prevent loggers and poachers.

“We only have three workers to manage Chala and only one of them is permanent. The village sanctuary initiative, although not notified, has resulted in some green soldiers helping us control the felling of trees, “said Dhimangshu Saikia, a ranger in the Forestry Division.

Each member of the Forest Protection Party has received an identity card to guard the green space that houses at least 1,000 types of trees, medicinal plants and 67 species of orchids, less than less than a decade ago, the 130, in addition to leopard, black panther. , deer and a variety of birds and butterflies.

Aside from surveillance, the company has been re-greening some 30 hectares dispossessed by timber smugglers and a few oil rigs planted by the Petroleum and Natural Gas Corporation decades ago. “We are keeping more than 20,000 seedlings that the Forestry Department gave us to plant. We have also established a 2.5-hectare biodiversity park in a part of the forest with an assortment of native orchids and trees, ”said Prachurjya Shyam, an executive member of the company.

Mystery of the altitude of the orchids

The forest of the Chala Reserve is about 100 meters above sea level. But it is home to a number of orchids that are usually found at higher altitudes.

“We are documenting the plants and herbs in our village sanctuary. They include the now rare ones Gnetum gnemon, a nutrient-rich plant that locals have been consuming for years, ”Mr Chowlu said.

But plant experts committed to society have found it intriguing that the sanctuary holds the Tainia penangiana, an orchid that is more than 500 meters above sea level.

The society has been carrying out regular awareness campaigns to emphasize the need to preserve these orchids and the plants that gave the dyes to the villagers. His initiative has won sponsorship from organizations such as the World Wide Fund for Nature-India.