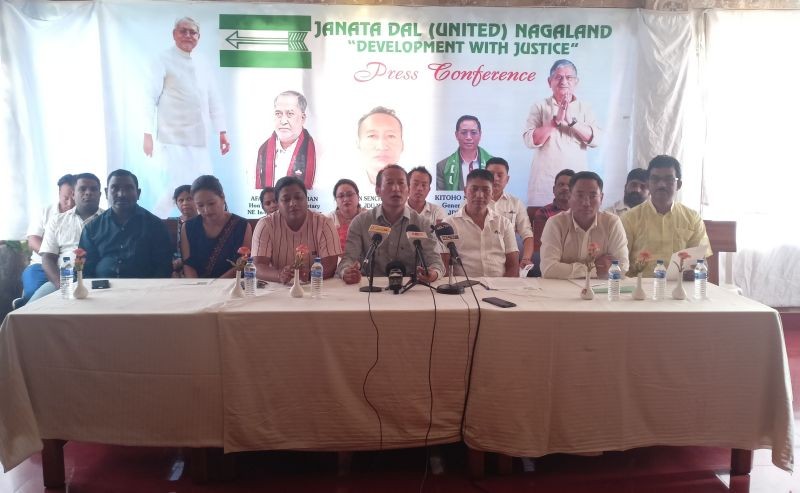 JD (U) office members and others during the press conference at Karl’s Inn, Dimapur on September 9. (Morung Photo)

Nitish Kumar to grace All Nagaland Bihari Conference in Dimapur

The Janata Dal (United) Nagaland will be sponsoring an All Nagaland Bihari Conference in Dimapur, to commemorate the 120th birth anniversary of Jaya Prakash Narayan (JP), and to acknowledge the contribution of the Bihari community in the political and economic aspects of the Naga society.

JDU supremo and Bihar Chief Minister, Nitish Kumar has consented to grace the ‘first of its kind’ conference which is scheduled for October 11, according to a press communiqué handed out during a press conference at Karl’s Inn, Dimapur on Friday.

As per the hand out, the Conference will be organized by the Nagaland Bihari Samaj, Bihari Kalyan Samiti and Matri Foundation, Dimapur. “This Conference is to acknowledge the contribution of the Biharis in the political and economic aspects of the Nagas ever since the days of JP who had come all the way from Bihar to work for Peace in Nagaland. This goes on to prove that it was the Biharis who had first contributed to the cause of the Nagas,” the communiqué stated.

Highlighting the life and work of Jaya Prakash Narayan or JP as he was famously called, who was part of the Nagaland Baptist Church Council’s Peace Mission alongside Rev Michael Scott and BP Chaliha, the JD (U) Nagaland emphasized that the conference would be a way for Naga people to acknowledge JP’s love and concern for the Nagas as well as other subsequent gestures shown by the Bihari community towards the Nagas.

Explaining further, State President and National Secretary Senchumo (NSN) Lotha observed that many people from Nagaland do not realize JP’s work towards peace in Nagaland.

He also recounted how JP had stayed in Nagaland, traveled to different parts of the state, to understand the Naga people. According to Lotha, JP stated that ‘a solution to the Naga problem is a must if India wants to live peacefully especially at the borders.’

“Even today, we are unable to get a solution because the message that Jaya Prakash gave to the Government of India did not find any place and GoI did not take the matter seriously for which we are what we are today as far as Indo Naga political problem is concerned,” the State JD (U) President added.

In the economic aspect, I noticed that the Bihari community in Nagaland is often perceived through very narrow lenses as most of them come to the state as immigrant workers or manual laborers. However, I emphasized that it would be wrong to look at the Biharis only through this angle, as the community not only has the highest representation in civil services from any single state in India but also has numerous members dominating the business sector.

Their hard work, in any field, is actually showing us ‘dignity of labour’ that the Naga people also must learn, Lotha asserted.

Similarly, General Secretary and intending candidate from 5 Ghaspani II AC Kitoho S Rotokha, supplemented that the Naga people as a whole has forgotten JP’s contribution, so the JD (U) is trying to wake the Nagas up in this regard.

He also mentioned that in 2019 when the state was facing a drought-like situation, “None of the states, or for that matter, no CM had ever come to the rescue of Nagaland state. But Nitish Kumar had contributed Rs 1 crore towards Nagaland state to at least look into the welfare of the Naga people.”

Further, justifying why the JD (U) is sponsoring the Conference, Rotokha maintained that Nitish Kumar has concern for Nagas and Nagaland and expressed his wish to visit the state, despite the fact that the Party does not have a single MLA or Panchayat members in the state.

He further extended invitation to all the Nagas to take part in the conference on October 11 at the DDSC Stadium where Nitish Kumar will ‘pour out his concern for the people of Nagaland.’

Meanwhile, in response to a query on whether the Bihar Chief Minister would continue his work of bringing all opposition parties fighting the BJP on one platform during his visit to Dimapur, NSN Lotha maintained that the Conference “is almost non-political, except for the fact that a political party like JD (U) is financially supporting it.”

“This visit of Nitish Kumar is purely non-political and he will not be meeting any political parties, even on the sidelines of the conference. In fact, he will come the same day and leave the same day,” he reiterated.

However, the JD (U) will be extending an invitation to all the political parties and the government of the day for the conference.