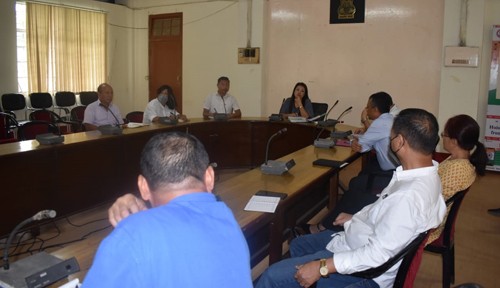 Dimapur, Aug. 11 (EMN): Around 5000 youth from Nagaland have registered for the upcoming Agniveer army recruitment rally scheduled from September 7 to the 15th at Bhagat Stadium in Rangapahar Military Station, Dimapur.

This was reported by Col. Rajesh, director of Army Recruiting Officer, Rangapahar, during a coordination meeting of stakeholder departments under Dimapur district held on August 10 chaired by the additional deputy commissioner (ADC) of Dimapur, Mhalo Humtsoe, in the conference hall of DC’s office. The meeting was held to discuss issues for the convenience of the Naga youth aspirants during the Agniveer army recruitment rally, stated a DIPR report.

Col. Rajesh has sought support from the district administration during the rally with regard to transportation and accommodation especially for those coming for the rally from far flung interior districts of Nagaland. He also highlighted the need for medical staff including a doctor and ambulance during the entire rally period.

Col. Rajesh further apprised on the need for at least five officials from the Education department to help them during verification of documents. I informed that activities at the rally ground would include pre-height and document check, 1.6 km run, physical measurements, physical fitness tests and medical check.

The candidates are asked to bring their admission cards during the rally.

Ending the recruitment rally as a good opportunity for the unemployed youth of Nagaland, the ADC impressed upon the members for taking the matter seriously by way of disseminating the message to all.

Putin’s State Media News Is Interrupted: ‘They’re Lying to You’ |...