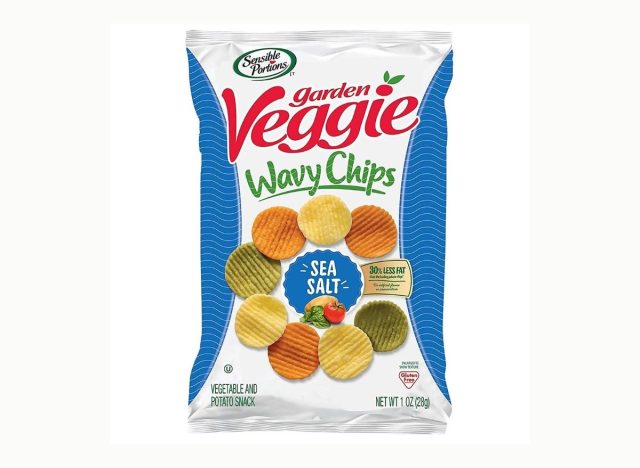 Snacking has a pretty bad rap, but it doesn’t need to be so. In fact, unless you’re eating meals that pack in between 600 and 700 calories, you might not even be getting enough food to provide the energy and nutrients you need without a snack here or there. Just make sure said snack consists of things like fruits, vegetables, nuts, unsweetened yogurt, and low-fat proteins.

Because while snacking isn’t inherently an issue, the types of foods you likely associate with the term “snack” are best avoided. Some snack foods, like potato chips, cookies, and cheesy crackers make little attempt to position themselves as healthy. Meanwhile, other snack foods try to position themselves as healthy despite actually having little nutritional value, and that can be even worse.

Either way, the companies behind the snacks featured below would probably rather you didn’t read the labels too closely. Here they are 10 secret snack companies would rather you not know about their products.

So-called “veggie” chips, most prominently the Garden Veggie Straws from the brand Sensible Portions, position themselves as a healthier alternative to potato chips with claims such as “30% Less Fat Than the Leading Potato Chips” right on the packaging. They are, however, not even adjacent to healthy. And they are only marginally made from vegetables. The first three ingredients found in Garden Veggie Straws are potato starch, potato flour, and corn starch, all high-carb, low-fiber ingredients. The “veggie” ingredients are tomato paste, spinach powder, and beetroot powder which do little more than supply fun colors.

The fact that fruit snacks are more akin to candy than fruit is hardly a revelation. But the lack of nutritional value of some brands is unsettling nonetheless, especially due to the lengths some snack companies go to obfuscate the truth. Kellogg’s Fruity Snacks, for example, cleverly use the term “fruity” rather than fruit right there in the name, whereas in truth the first ingredient is corn syrup, the second is sugar, and the third is “apple puree concentrate,” hardly a healthy ingredient. Meanwhile, the packaging tries to convey nutrition by highlighting things like a lack of trans fats or sodium, things you’d not expect in fruit in the first place.

Dozens of staple American snacks are also popular in other countries, but they are offered under other names to help bolster sales. According to Mashedthis includes things like Doritos Cool Ranch Chips, which are called “Cool American” in Europe, Diet Coke is called “Coke Light” in many places, Lay’s chips are called “Walkers”, the Milky Way bar is the “Mars” bar in the UK, and on it goes.

According to a lawsuit filed late last year, the wasabi-flavored snacks sold under 7-11’s private snack label contain no wasabi, reported Reuters. The suit alleges that the company has been charging an elevated price based on the purported inclusion of the unique, expensive ingredient despite the flavoring coming from cheaper alternatives.

In April of the year 1995, a man named Carl Grady swallowed a partially-chewed Dorito tortilla chip that, allegedly, lodged in his throat, the sharp ends of the broken chip causing so much pain and damage that Grady required immediate care at a hospital. , according to Find Law. Esophageal tears were later discovered, and Grady and his wife brought a lawsuit against the chip’s maker Frito-Lay. Despite the case eventually being dismissed, it was a dark chapter for the snack maker that lasted for multiple years.6254a4d1642c605c54bf1cab17d50f1e

According to Business Insider, a few years back the FDA sent the makers of Kind bars a stern warning that included all sorts of damning requests. Among the agency’s demands was that Kind cease claiming their bars were high in protein and fiber, rich in antioxidants, and free of trans fats— all of those assertions were deemed inaccurate.

Last year, unionized employees in multiple states went on strike against their employer, Nabisco, according to The New York Times. Members of the Bakery, Confectionery, Tobacco Workers and Grain Millers union in Illinois, Virginia, Georgia, Colorado, and Oregon protested against canceled pension plans, shift times sometimes lasting up to 16 hours, a withholding of overtime pay, and other grievances.

In 2019, snack and beverage giant PepsiCo brought a lawsuit against four small farms in India, according to CNN. The problem? The farmers were growing potatoes. The specific potatoes in question were a variety PepsiCo claimed were proprietary, reserved for use only in the company’s Lays brand potato chips. The gigantic company was demanding 10 million rupees (or about $ 143,000 USD) from each of the small farms, a sum that would have ruined the minute operations. But PepsiCo offered to drop the suit if the farmers stopped growing the specific varietal of potatoes or agreed to join the company’s farming program and turn over their crops.

The popcorn kernels inside a bag of microwave popcorn itself may be safe enough, if hardly all that healthy, but you still may want to think twice before eating it. That’s because chemicals used to coat the inside of the bag itself may well increase your risk of developing cancer, according to Livestrong. Many brands of the popular snack use a chemical called perfluorooctanoic acid, better known as PFOA, that helps prevent the kernels from sticking to the bag’s interior, but that can also wreak havoc on your health.

Sure, a bag of Baked Lays has less fat than a regular bag of the brand’s chips, and the same is true across brands that offer both baked and traditionally fried potato chips. But don’t think of baked chips as healthy. In fact, according to Health Essentials by the Cleveland Clinic: “They’re highly processed and often so low in fat that you can consume large quantities without ever feeling full. This can increase blood sugar and cause an insulin surge, promoting fat storage. ” They are also often high in sodium, with a 110-calorie serving of Baked Lays containing 140 milligrams of sodium, for example.